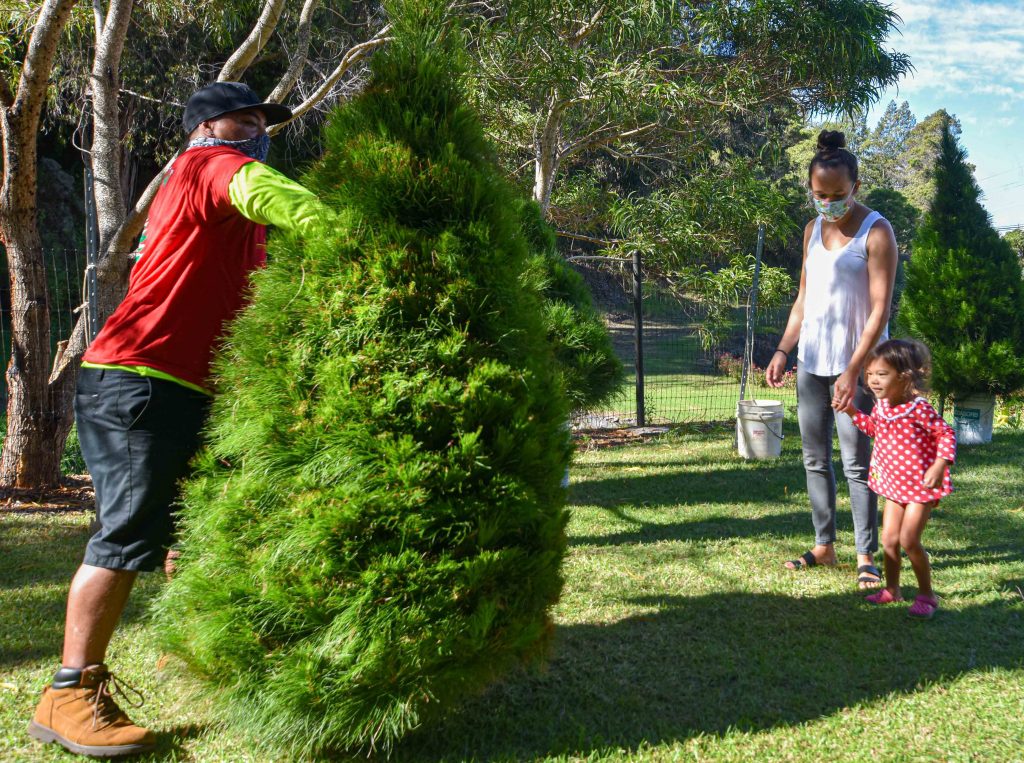 Arya Eaton, 2, holds her mom’s hand as she picks out a Christmas tree at the Kula Botanical Garden. Photo Credit: Cammy Clark The McCord Family grows about 5,000 to 6,000 Christmas trees on 10 acres at the Kula Botanical Garden. Photo Credit: Cammy Clark Ashley Lindsey of Wailuku takes a photo of her 2-year-old daughter Arya who picked out a Christmas tree just her size. Photo Credit: Cammy Clark

Volunteer Kamalei Benjamin picked up the 6-foot, fluffy Monterey pine and spun it 180 degrees for Arya Eaton to inspect. The 2-year-old in a red and white polka dot dress had rejected other trees, but this one was the winner as evidenced by her jumping up and down in squealing delight.

“If we didn’t sell Christmas trees, we’d be out of business,” said Warren McCord, who with his wife Helen started the botanical garden in 1968 on the slopes of Haleakalā.

Like many businesses on Maui that rely heavily on tourism, the COVID-19 pandemic hit the botanical garden hard.  A forgivable federal loan through the Paycheck Protection Program helped to provide his loyal staff, including a gift shop manager who has worked there for 35 years, with wages. But expenses to run the garden did not stop even though the income did.

“We went through our savings in just a few months,” McCord said.

At 10 am Friday, the first day of the five-day event, the parking lot already was full and a line had formed to pick out a tree. To maintain social distancing because of the pandemic, only 2 to 3 families at a time were let into the selection area.

“It used to be a free for all,” said Kevin McCord, Warren’s son. “But we want to keep people safe.”

The fragrant smell of freshly cut trees wafted in the air that was a crisp 72 degrees at the 3,600-foot elevation. One woman called the smell “delicious.”

“It smells so fresh,” noted Jason Emery of Kula. “I’d rather be here than in the parking lot of Home Depot.”

Most of the trees for Friday’s sale had been cut the day before. And some Kevin McCord cut Friday with a chainsaw that he also used to make sure the trunks were nice and straight.

The McCord family didn’t plan to sell Christmas trees when they started the botanical garden more than 50 years ago to display Warren’s landscape architecture business. But the California transplants needed a wind break for the garden and planted Monterey pines that the state forestry division was giving away for free.

“My parents were given more than they needed for the windbreak, so they decided to prune a few into Christmas trees,” Kevin McCord said. “In 1971 and 72, Christmas trees were hard to come by.”

As the story goes, according to Kevin, a local resident saw one of the pruned Christmas trees and wanted to buy it. Kevin joked his family was so poor at the time they would have sold a child. A week later, the cousin of the person who bought that first Christmas tree wanted to know if he could buy one, too. “It just took off from there,” Kevin said.

Kevin estimates there are 5,000 to 6,000 Christmas trees planted on about 10 acres, all at different stages of growth. Most are Monterey Pines. But Warren says they also have Monterey cypress for people with allergies or who otherwise can’t handle the fragrance of pines.

In a beat-up truck, he drove down a paved path just big enough for one vehicle that he called “Coronavirus Highway.”

A month ago, the producers of Temptation Island, a TV series about four couples at a crossroads who decide if they should stay together, couldn’t get a permit to film a scene on a Maui road. So the producers rented the botanical garden for a day and used the path for a road bike scene, Warren said. “It was kind of fun.”

The paved path turned into a dirt road that led to a field where half was filled with Monterrey pines that were about 1 foot tall and recently planted. They had begun in seed trays.

Warren explained that at this stage each one is pruned at the bottom to grow faster and more shapely. “They look ugly now; but they will shoot out and fill in,” he said.

In the first year the trees grow about 2 feet; and in the third year they grow another 2-3 feet to about 5 feet. After year four, they are about 6 to 7 feet tall. The trees are pruned four times a year, cleaned, and sprayed for bugs and diseases.  The trees also are watered a lot after planting and in September to hydrate them for the Christmas tree sale.

“This is the largest Christmas tree farm on Maui,” Kevin said. “We’re not on the scale of tree farms in Oregon, but we’re either No. 1 or 2 biggest for the whole state of Hawaiʻi.”

Kevin was sweating profusely after lugging tree after tree to his truck, for distribution at the entrance to the garden. “We grew up doing this,” he said. “I was born in ’69 and we used to sit up on the hill and look at the people lined up to go in the tree lot. It’s been a family affair, with the help every year of volunteers. The Makua family are on their third generation of helping over the past 30 to 40 years.”

Kevin said a long time ago when the tree farm was smaller, people used to be able to chop down their own trees. But it got out of hand with people discarding cigarette butts and candy wrappers in the field – with incidents of people switching tagged trees.

This year the prices range from $42 for a 3-foot tree to $145 for a 9-foot tree. And two 18-foot trees were sold. One went to the Hyatt Regency Maui Resort & Spa in Kaʻanapali and the other to Seabury Hall Middle School in Makawao.

They only cut the trees they need for the sale. “If we don’t need it, we don’t cut it,” Kevin said. “What doesn’t sell gets bigger for next year.”

At the end of the sale the McCords donate trees to the Aloha House and the Malama Family Recovery Center.

Arya, the 2-year-old, said she was happy with her new tree. It would be decorated with new ornaments bought last week of Elsa and Anna from Disney’s Frozen 2.

Said Arya’s mother, Ashley Lindsey of Wailuku: “The tree will be beautiful.”

Cheeseburger in Paradise and Waikiki Brewing Company
All FOTH and BOTH Positions!
West Maui · 4 days ago