Safer without Santa, But Maui’s Christmas Spirit Lives on during Pandemic 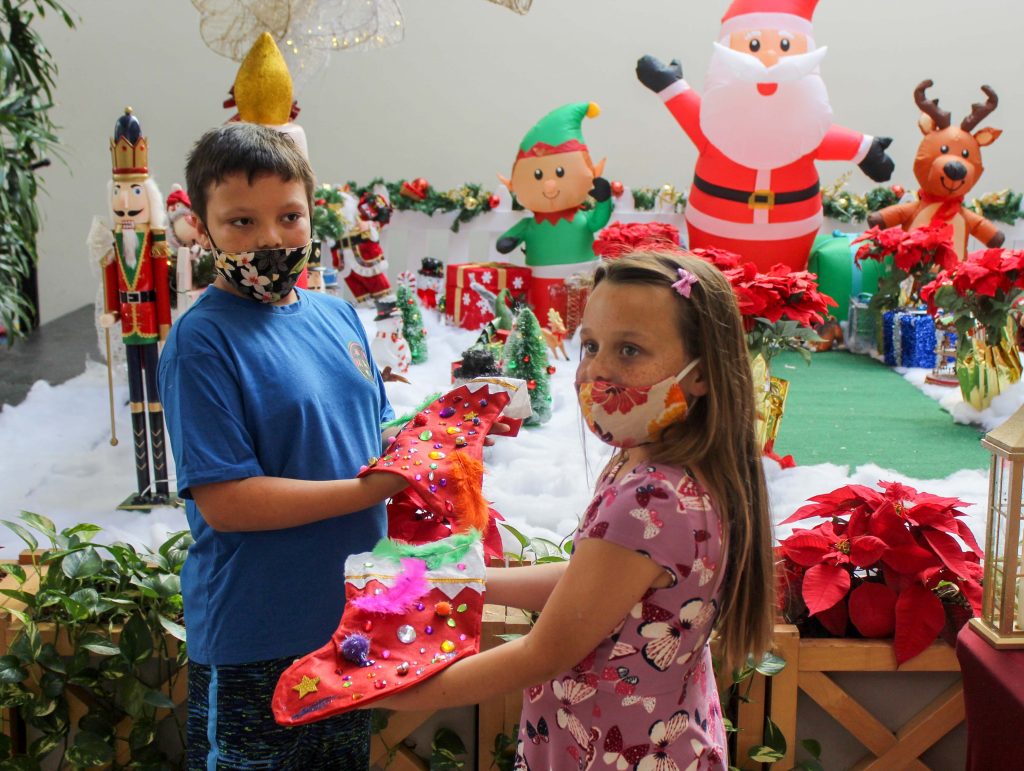 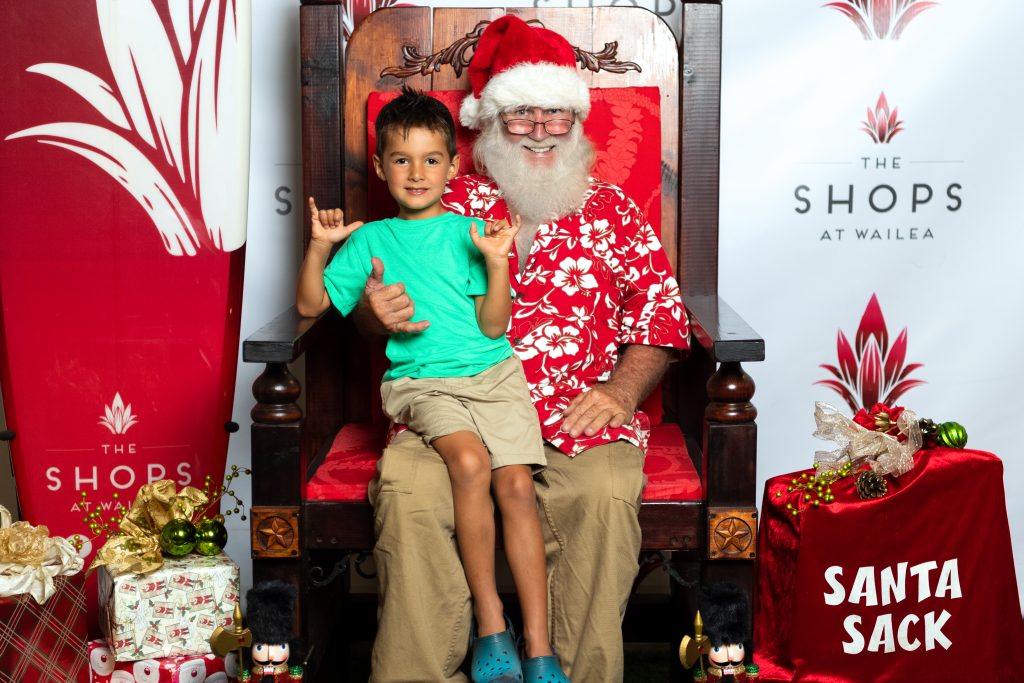 In 2019, Makani Gilbert sat on Santa Charlie’s lap for a photo at The Shops at Wailea. This year, there will be no Santa there due to the COVID-19 pandemic. File Photo Courtesy: Gilbert & Associates 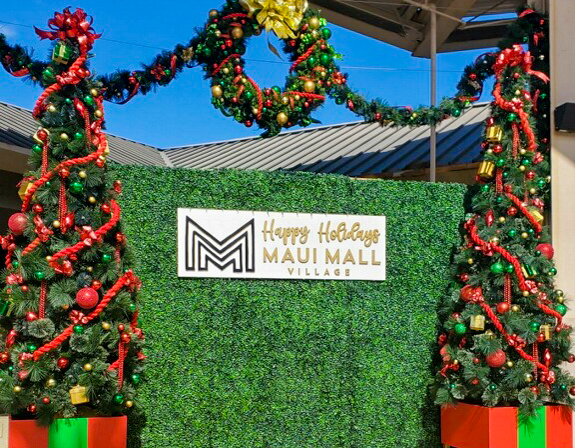 Maui Mall will not have a Santa this year, but set up a “Selfie Stage” for patrons to take their own holiday photos. Photo Courtesy: Maui Mall 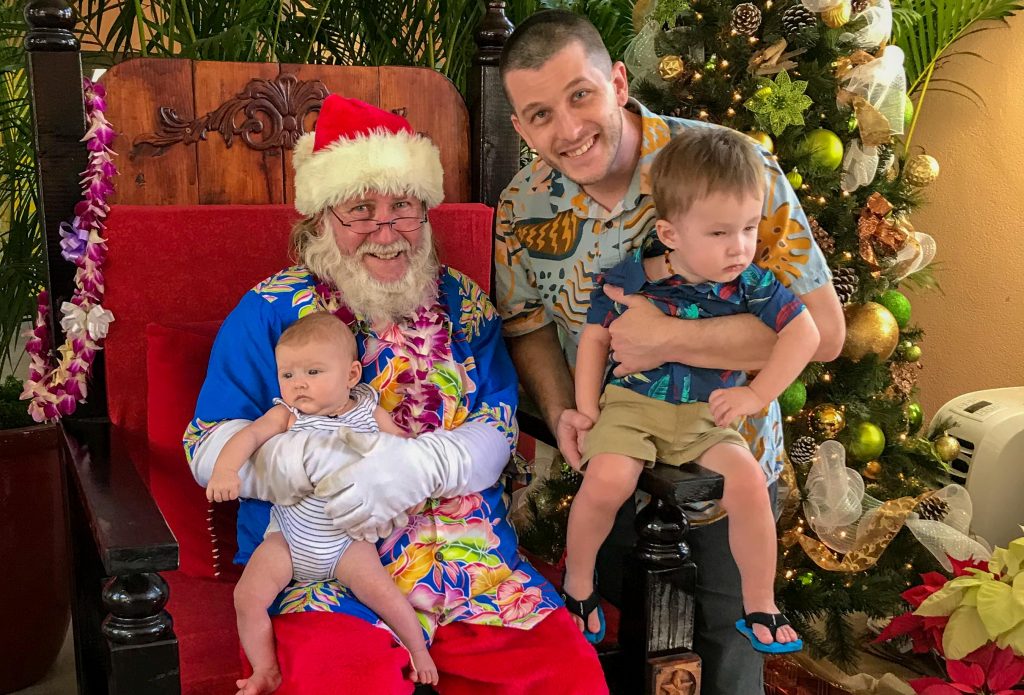 Santa Charlie can’t hug kids this year due to COVID-19, but he said he’ll be back next holiday season with an even longer beard. Photo Courtesy: Santa Charlie Silva

This time of year, Santa Claus usually is busy on Maui, spreading good cheer and posing for pictures with kids, families and pets at other shopping centers, big hotels, private parties and public events.

He’s even been known to start the holiday season by making a grand entrance at The Shops of Wailea by leading a parade in a 1968 Chevy Convertible Camaro.

But not this Christmas season, in the strangest of years. The COVID-19 pandemic has caused most malls, hotels and party planners throughout Maui to forgo Santa visits for other ways to be festive but safe.

“I feel like a Scrooge now,” said Nicholas Gilbert, Vice President of Gilbert & Associates, which handles the marketing and advertising for The Shops of Wailea. “We thought about it a lot but with all the restrictions and flare ups, we decided we couldn’t do have Santa for the safety of the public.”

Adelle Lennox, owner and founder of Dazzle Entertainment on Maui, said she has been booking Santa Clauses the past few years for Maui Mall, resorts, corporate events and holiday parties.

“Sometimes it’s not just Santa, but elves and face painters, too,” she said. “I lost a couple of big corporate contracts. We talked about ways to do social distancing, putting up partitions and staggering people, trying to be creative and keeping the magic of Santa. But Santa is at high risk and the last thing we want to do is lose Santa.”

That is the case of Santa Cameron Keys of Kihei. He said he can’t have kids sit on his lap because he said jokingly: “At 1648 years old – you know Santa was born in the 4th century – I am in a high-risk category.”

Cameron actually is a month shy of turning 70.  He said he did one blessing of animals at a church for a Santapaws event this season, but is hanging up his red suit for the rest of 2020. “I’m a little leery of getting sick [from COVID-19] and bringing it home to my wife. She would not forgive me.”

But he deeply misses being Santa: “It’s the most fun I have all year.”

Kids also will not be able to tell Santa what they want for Christmas at Maui Mall. Instead, the mall has created a “Selfie Stage” at center court where patrons can take their own Christmas photos under a large wreath and between two decorated Christmas trees.

“We wanted to make sure our community still had an opportunity to take fun holiday photos free of charge,” Brian Yano, manager of Maui Retail, said in a release.

And there will be no jolly St. Nick this year at Lahaina Cannery. Instead, the shopping center is hosting Christmas crafts every Saturday where keiki can decorate their own stocking, color holiday pages and get a candy bag. Materials are provided inside the stocking so there is no sharing of materials, said Jessica Mannor, social media and account executive for Gilbert & Associates.

Santa Charlie Silva of Pukulani has been bringing Christmas cheer and a hearty ho, ho, ho to kids and adults since 1995, when he was asked by the manager of the Queen Kaʻahumanu Center if he could help out the other Santa. Silva had the real full beard, which kids love to tug on to make sure he’s not an imposter, but not the belly. So he improvises with “a couple of fake stomachs.”

Last year, Santa Charlie held court at The Shops of Wailea. But this December his only public appearance will be a Dec. 19 event from 2 to 4 pm at the Starbucks in Pukulani. He’s also doing a longstanding gig at a private party at a ranch.

“I love being Santa,” he said. “You can meet people from all over the world.” And one time when 10 underprivileged kids from Wailuku came to the Queen Ka’ahumanu Center and didn’t have money to pay for photos, Santa Charlie paid for them himself.

“They left singing me Jingle Bells and Santa is Coming to Town,” he said. “Santa is not supposed to cry. But I did a little.”

The Queen Ka’ahumanu Center is one place that will have Santa visit this year. On its website, it says: “He’s Coming to town.” From Dec. 12 through Christmas Eve, there are time slots to have photos with Santa. Reservations are encouraged.

The center is taking safety precautions, according to the website. For starters, Santa has a health screening before employment, and his temperature is taken before the start of each shift. The precautions also include mandating masks for everyone 2 or older. Santa’s suit is sprayed between shifts with disinfectant.

Mitch Allen, Founder and Head Elf of Dallas,TX-based HireSanta.com, said about 1,000 of his Santas have been kept busy on the mainland and in several countries this year primarily doing virtual visits. “So far nobody has gotten COVID through zoom,” he said.

But on Maui, Gilbert of Gilbert & Associates, said: “We thought about virtual, but what we find in Hawai’i and our local community on Maui is that people like to go as a family. Virtual, they are not engaged.”

The Shops of Wailea is doing a 12 Days of Christmas Giveaway, from Dec. 12 through Christmas Eve. Each day, a Maui resident will win a fabulous prize, gifted in a custom designed Mele Kalikimaka tote bag.

“It’s such a bummer not to have Santa,” Gilbert said.

But the Christmas spirit continues, and as Santa Charlie said: “My beard will be longer for next year.”