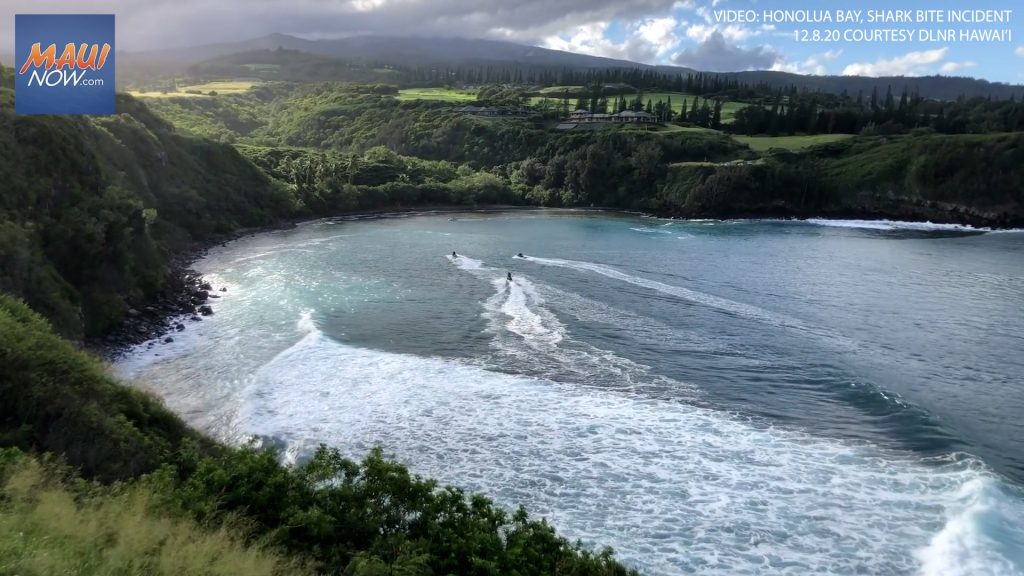 An adult male surfer who was bitten in an apparent shark encounter Tuesday morning at Honolua Bay, has since succumbed to his injuries early Wednesday evening, Maui Now has confirmed.

The 50-60 year old man was initially listed in stable condition after emerging from surgery on Tuesday afternoon, but his condition was downgraded today.

The incident occurred at around 7:45 a.m. on Tuesday about 20 yards offshore as the man was paddling out from the old ramp.

It happened hours before the Maui Pro surf competition was set to get underway for professional women surfers. The event was subsequently suspended and beaches were closed for a mile in either direction from DT Fleming to Punalau “Windmills” Beach.

Sources tell Maui Now that Ocean Safety crews hired for the surf event were reportedly nearby and quickly tended to the injured surfer prior to the arrival of emergency responders.

Initial reports indicated that the man suffered injuries to his left side lower extremities.

The death is the first in Hawaiian waters since May of 2019 when a 65 year California man was bitten while swimming in Honokōwai.

Tuesday’s incident also came just a week and a half after a Thanksgiving Day incident at Honokōwai in West Maui in which a 35-year-old California woman suffered severe trauma injuries to her front torso in an apparent shark bite incident.  In the Nov. 26 incident, the woman was swimming 100-yards off-shore of Mahina Surf Condominiums when a companion near-by saw a fin in the water and reported the woman was bitten by a shark.

Officials with the state Department of Land and Natural Resources say that for centuries, traditional Hawaiian chants have warned about an increased risk of shark bites in the fall, when the wiliwili tree blooms.

In previous reports, DLNR Aquatics Division officials have advised: “The best thing ocean users can do to minimize their risk of shark bites is to utilize beaches with lifeguards, stay near other people, and don’t go too far from shore. Also, avoid murky water and areas near stream mouths.” More safety tips can be found at the Division’s shark web site, hawaiisharks.org.

Documented incidents reported this year by DLNR include: