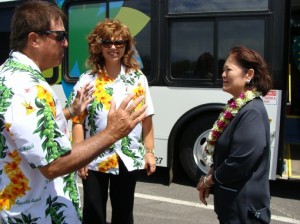 Congresswoman Hirono toured similar public buses and met with drivers at the Roberts Hawai`i base yard in Kahului. Photo by Wendy OSHER Â© 2009

“The recovery bill is really important to every county and the state.Â  It means jobs, it means retention of jobs, it means allowing this type of purchase that would otherwise be really hard for the county to do,” said Hirono.

In addition to the rural bus funding, Hirono said, Maui is expected to get and additional $35 million in stimulus funding for job retention, road improvements, and other infrastructure projects.

“Our primary purpose was to have an affordable way for people to get to their jobs.Â  And so by taking the bus from Haiku or Upcountry or Pukalani, they can get to Lahaina and get there almost like it’s an express.Â  So it saves them not only money but also time and the grief of being in traffic all of the time,” said Tavares.

Bus ridership on the Valley Isle experienced a 38% increase so far over last fiscal year.Â  In the previous fiscal year, bus ridership increased 68% from year before levels.Â  County Transportation Director Don Medeiros says there is an average of 6,000 people who board the bus each day-that translates to about 400 people boarding per hour.Â  By June 30th, the department expects to hit the 2 million mark for boarding passengers. 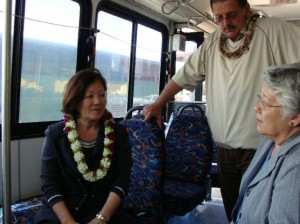 Congresswoman Hirono, Mayor Tavares, and County Council member Mike Victorino discussed the rural bus funds and the benefits the service will provide to the island. Photo by Wendy OSHER Â© 2009

Total funding for the buses through the American Recovery and Reinvestment Act is $977,811.

“I’m glad that we can add three more buses to one of the fastest growing bus systems in the country because the need is great,” said Hirono.Â  “I spoke with several drivers who are enthusiastic about these buses because their ridership is already overflowing. Â I agree with Mayor Tavares that, especially in rural communities, these new buses will have the chance to help save Maui residents time, money, and jobs by providing additional options for getting to work.”
In conjunction with $161,865 provided by the County of Maui, the Recovery Act funds will be used to purchase a trio of 37-seat, ADA compliant low-rise buses.Â  The buses are scheduled for delivery to Maui in mid-2010.

MAUI HIGH HEADS TO THE â€œSUPER BOWL OF SMARTSâ€

STAND-UP PADDLE BOARD USE AT ALA MOANA TO BE DISCUSSED