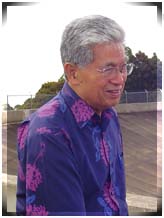 Akaka also outlined the intended effects of the bill saying, “This bill DOES NOT allow for private lands or businesses to be taken and DOES NOT permit Hawaii to secede from the Union.Â  Further, it DOES NOT authorize gaming in Hawaii.Â  Rather, this bill provides the structure necessary for meaningful interaction between Native Hawaiians and non-Native Hawaiians.Â  Especially as policies are formed and implemented.”

“Such actions,” he said, “enable us to honor the needs of our state, preserve its cultural heritage, and address issues that have lingered without resolution since the overthrow of the Kingdom of Hawaii.”

Below is a complete transcript of Akaka’s testimony:

Chairman DORGAN and Vice Chairman BARRASO thank you for holding today’s hearing.Â  I welcome our witnesses.

As members of the Senate Indian Affairs Committee, we have jurisdiction to examine and address the needs of our country’s indigenous people.Â  This specifically includes Native Hawaiians, Alaska Natives, and American Indians.

The United States has not always acted honorably in its treatment of our nation’s first people.Â  However, I am proud that as a country we have pursued actions acknowledging past wrongs and building a mutual path forward.Â  It has been the work of this Committee and Congress to advance policies that uphold native rights and their ability to exercise self-governance and self-determination.

Those that are not familiar with the history of Hawaii may wonder why such a process is needed.Â  It is needed because in 1893, the Native Hawaiian government led by Queen Lydia Lili’uokalani was illegally overthrown.Â  It was done with participation by agents of the U.S. and U.S. military force.Â  At the time, President Grover Cleveland characterized America’s conduct as an “Act of War” against the Native Hawaiian people and called for the Queen to be reinstated.Â  The overthrow resulted in generations of Native Hawaiians being disenfranchised from their government, culture, land, and way of life.

S. 1011 provides a structured process to reorganize a Native Hawaiian governing entity to exercise self-governance and self-determination.Â  Once federally recognized, the Native Hawaiian governing entity can enter into discussions with the State of Hawaii and the United States.Â  Any agreements reached by the three parties will require implementing legislation at the state and federal level.

This bill DOES NOT allow for private lands or businesses to be taken and DOES NOT permit Hawaii to secede from the Union.Â  Further, it DOES NOT authorize gaming in Hawaii.Â  Rather, this bill provides the structure necessary for meaningful interaction between Native Hawaiians and non-Native Hawaiians.Â  Especially as policies are formed and implemented.Â  Such actions enable us to honor the needs of our state, preserve its cultural heritage, and address issues that have lingered without resolution since the overthrow of the Kingdom of Hawaii.

Reconciliation is a means for healing, enabling an ongoing dialogue that empowers us to address the political status and rights of Native Hawaiians.Â  In order to implement the reconciliation process, in 1999, Attorney General Janet Reno and Secretary Bruce Babbitt designated officials to represent the Departments of Justice and the Interior in the reconciliation process between Native Hawaiians and the federal government.Â  These officials traveled throughout the State of Hawaii, held public meetings with the Native Hawaiian community, and produced a report titled, From Mauka To Makai:Â  The River of Justice Must Flow Freely.

This comprehensive report identified crucial steps that the federal government should take to continue the process of reconciliation, including the recommendation to extend federal recognition.Â  Specifically the report stated,Â  “As a matter of justice and equity, the Departments believe the Native Hawaiian people should have self-determination over their own affairs within the framework of Federal law, as do Native American tribes.”

The legislation we are considering today, allows us to take the necessary next step in the reconciliation process.Â  S. 1011 is constitutional and provides a framework respectful of the needs of Native Hawaiians and non-Native Hawaiians.Â  Their combined efforts will be needed, as each will play an active role in reaching agreements and enacting implementing legislation at the state and federal levels.

Federal recognition of Native Hawaiians is supported by a majority of people in Hawaii, including the Governor, State Attorney General, State Legislature, and numerous native and non-native organizations.Â  In Washington, D.C., S.1011 is a bipartisan bill with the support of national organizations including the American Bar Association, National Congress of American Indians, and Alaska Federation of Natives.

I look forward to building upon the established record as we proceed with the 10th hearing this Committee has held on the issue of Native Hawaiian governance.