Hurricane Felicia has been downgraded from a category 4 to a category 2 hurricane.Â  The system was last located at 1280 miles east of Hilo, Hawaii and moving toward the west-northwest at 13 mph.Â  A gradual turn to the west is expected over the next couple of days at Felicia approaches the state. 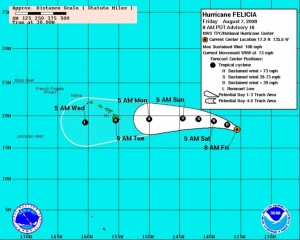 Additional weakening is expected during the next 48 hours and Felicia is forecast to weaken to a tropical storm on Saturday.

FORECAST DISCUSSION:Â  (Provided by Forecaster BLAKE with the NWS and National Hurricane Center)

Felicia continues to weaken with a shrinking central dense overcast and a less distinct eye on satellite pictures. There is also some suggestion on night visible images that the mid-level center may be becoming somewhat displaced from the low-level circulation.Â  A blend of the DVORAK T and CI numbers from SAB/TAFB give an initial intensity of about 85 KT for this advisory.Â  Steady weakening is likely as the cyclone traverses cool waters for the next couple of days…though the shear is expected to remain low.Â  In about 48 hours…water temperatures start to slowly rise…but vertical wind shear is expected to become moderate from the west. The models respond to these changes a little differently…with the statistical guidance showing Felicia weakening faster than the dynamical guidance. The NHC forecast is close to the previous one…generally a little above the model consensus…and shows Felicia weakening to a tropical depression as it approaches Hawaii.

The initial motion has turned a little bit to the left and accelerated…now 295/11.Â  This is probably the beginning of the well-advertised gradual turn to the west due to subtropical ridging building to the north of the hurricane. Global models are in good agreement on this turn and little change has been made to the early part of the official forecast. In a couple of days…the steering pattern becomes more complex with a second mid-level ridge forecast to build near Hawaii and a weakness in the ridge to the northeast.

If the cyclone has gained enough latitude…it is possible that this weakness could cause Felicia to turn more to the west- northwest…a track favored by the ECMWF/NOGAPS/GFS models.

…suggest that the system will continue moving toward the west or west-southwest after bypassing the weakness in the ridge.Â  Since Felicia is likely to be weak and steered more by the lower-level trades…the official forecast will lean toward the second scenario at this point.

Data from a g-iv aircraft mission to the north and northwest of the hurricane this morning should be assimilated into the 1200 UTC global model guidance…and hopefully will bring those models into better agreement in the longer-term.