The National Weather Service has issued a Flood Potential outlook for the State of Hawaii.Â  The latest forecast from the National Hurricane Center indicates that Hurricane Felicia will weaken from its current Category 2 status to a tropical storm or tropical depression as it nears the Hawaiian Islands. Â Â In either case, Felicia has the potential of producing heavy rainfall with possible flash flooding in the islands.Â  The rain bands may reach the Big Island Early on Monday and spread westward across the state. 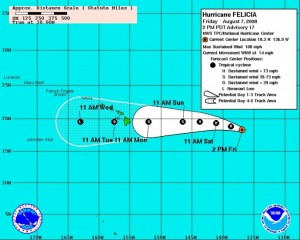 At this point, there is considerable uncertainty in the locations that will be affected, the onset and duration of the rain, and the rainfall amounts. All of these elements are dependent on the track Felicia ultimately takes.

Felicia was last classified as a Category 2 storm with maximum sustained winds of 100 mph.Â  The system was last located at 1190 miles east of Hilo, Hawaii and was moving toward the west-northwest at 14 mph.Â  The system is expected to turn to the west tomorrow.

Officials are continuing to forecast a slow weakening over the next two days.

FORECAST DISCUSSION:Â  (Provided by Forecaster BLAKE with the NWS and National Hurricane Center)

Visible images show that Felicia remains a relatively well-organized hurricane with a cloud-filled eye and impressive spiral banding.Â  However…microwave data from a 1649 SSMIS pass show that the Eye-wall has weakened considerably from earlier with only about 50 percent coverage around the eye.Â  There has been little change in the latest DVORAK estimates…so the maximum winds will be kept at 85 KT for this advisory.Â  Weakening is forecast throughout the period…initially due to cool waters…then in a couple of days due to a combination of marginal SSTS and increasing westerly shear.Â  Intensity guidance is in rather good agreement and the official forecast is close to the intensity consensus and the previous forecast.

A gradual turn to the left continues and the initial motion is about 290/12.Â  A subtropical ridge building to the north of the hurricane should force a motion toward the west by late tomorrow and numerical guidance is in good agreement on this scenario.Â  There is still a fair amount of spread with the model guidance in the longer range with the GFS/NOGAPS on the northern side of the guidance envelope and the UKMET/GFDL/HWRF on the southern side.Â  The afternoon model consensus lies close to the previous NHC forecast…and with no clear signals on which model solution to prefer…little change has been made to the official forecast.