Felicia weakens slightly as it continues to approach the Hawaiian Islands. 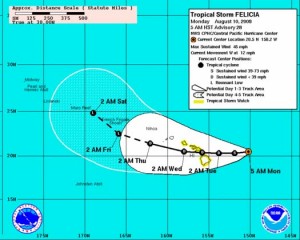 At 500 am HST, the center of tropical storm Felicia was located about 325 miles east of Hilo, Hawaii and about 500 miles east of Honolulu, Hawaii (near latitude 20.5 north…longitude 150.2 west).

Felicia is moving toward the west near 12 mph, and this motion is expected to continue through Tuesday night. On this track…the outer winds from Felicia are expected to reach the easternmost Hawaiian Islands later tonight, before spreading across the central Hawaiian Islands on Tuesday.

Maximum sustained winds are now near 45 mph with higher gusts.

Additional weakening is forecast during the next couple of days.

Felicia is expected to reach the main Hawaiian Islands as either a tropical depression, or possibly a tropical storm if the expected weakening does not occur.

Tropical storm force winds extend outward up to 125 miles from the center.

A large swell generated by Felicia is already affecting the main Hawaiian Islands. This swell will continue to build across the state today and tonight.Â  Also, regardless of the intensity of Felicia when it reaches the Hawaiian Islands, locally heavy rainfall is still expected to occur and flash flooding remains a possibility.

SUMMARY OF 500 AM HST INFORMATION:

An intermediate advisory will be issued by the central pacific hurricane center at 800 am HST followed by the next complete advisory at 1100 am HST.