The fee for parking at Kahului Airport will increase from $7 to $9 per day under a new rate plan set to go into effect on Monday, August 17, 2009. 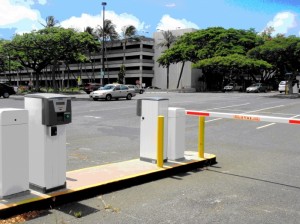 The fee increase is even greater at Honolulu International Airport where daily rates will increase from $10 to $13.Â  Rates at other neighbor island airports including Kona, Hilo, and Lihue will undergo the same rate increase as Kahului.

The increase is the first to be implemented since 1993 and aims to offset the capital costs of parking improvements under the state’s Airports Modernization Plan.

“We realize any increase in the price for parking is difficult, but this increase is necessary to continue building for the future and improving the level of service to the traveling public,” said Brian Sekiguchi, deputy director of airports. Â “We are making additional accommodations and offering alternatives to help offset this cost to the traveling public.”

The state Department of Transportation is providing a new economy parking lot (Lot J) at HNL.Â  The lot is located between the new parking structure and the main terminal parking structure, and is scheduled to open today, Friday, July 31.

The DOT will also implement a grace period at all state airports, allowing travelers to park at airport parking facilities for free for the first 15 minutes.Â  Coupled with airport cell phone lots, DOT officials say this will give the traveling public another option when dropping off or picking up friends and families at the airport.

From fiscal years 2007 to 2009, $343.6 million has been invested in various airport modernization projects, including a new air conditioning system at HNL, security enhancements and a new sterile corridor at the HNL International Terminal, currently under construction.

(Posted by Wendy Osher, Information provided by the Hawaii state Department of Transportation.)