After years of discussion, the county broke ground today on a new South Maui Community Park.  Maui Mayor Charmaine Tavares said the county identified the need years ago and planning has been in the works since the days when she served on the Maui County Council.

“It’s a huge need,” said Maui Mayor Charmaine Tavares.  “When I was Parks Director one of the first things that we did was do an assessment of each community, to find out per population, what park facilities we had, and if there a deficit,” she said.  The study found that there were deficits, everywhere, but the biggest was in South Maui.  “The only active recreation field at the time was Kalama Park,” said Tavares.

While the county has moved forward with other facilities since then, like the Kihei Community and Aquatics Center, the new park will add much needed field space to the South Maui region.  Phase 1A encompasses nearly 20 acres of the 45 acre parcel and includes a soccer field, softball field, 2 restrooms, a playground, jogging path, picnic tables and 113 parking stalls.

“We have been on a mission to try to improve south Maui’s ‘active’ recreation opportunities by putting more ball field out here,” said Tavares.

Chad Goodfellow, the Vice President of Goodfellow Bros. construction company recalls the need for the fields years ago when he played on the Kihei Dolphins baseball team.

“We used to practice down at Kalama Park and there’s only the one field.  We didn’t really have bases to run-so we put down mitts.”

“I mean we heard story, right: The Kihei team has to play their home games in Kahului.  Well, that’s not a home game, that’s an away game.  Not far away, but it’s still an away game.  So we still need to continue to focus on South Maui because it has the greatest need,” said Tavares. 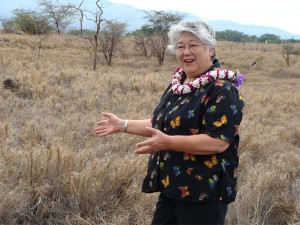 The 44.8-acre project is bounded by  Kihei Elementary to the North and the Kihei Recycling and Redemption Center to the South.  The future park is makai of the Piilani Highway and bordered to the West by the future North-South Collector Road.

“We feel that not only does Kihei need this park, but our industry needs this park,” said Goodfellow, whose company is doing the project coordination for the initial phase.

The first phase is projected to cost an estimated $11.2 million dollars and will take an estimated year to complete.

The total build out of the project is master planned and will be completed in future phases.  Additional plans call for more fields, play courts, a gymnasium and a youth center.