VIDEO: Maui Firefighter first in state to be honored with Firemark Award

A Maui Firefighter was honored today with the prestigious Liberty Mutual Firemark Award.  The presentation honors the valor and selfless spirit of firefighters who take the ultimate risk to help keep communities safe.

In addition to being the first firefighter to be awarded the Firemark honor in the state of Hawaii, Crilley is also being nominated for the company’s national award.

Maui Firefighter Lawrence “Larry” Crilley was honored for his efforts in the off-duty rescue of a near-drowning victim that took place on April 27, 2008 at Tavares Bay.

Earlier this year, Crilley was honored with the Kahuola Award from the Maui Fire Commission for his efforts in going beyond the call of duty in the same incident. 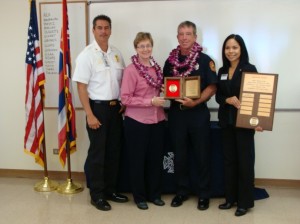 “The quick response and diligent efforts exhibited while rescuing, resuscitating, and saving an unconscious man floating in the ocean by firefighter Crilley, while off duty I might add, are truly exceptional, and prevailing reasons why there was no loss of life in the incident that day,” said Leilani Johnson, a representative with Liberty Mutual who presented the award.

Realizing that there may be a possible spinal injury, he also prevented other on-lookers from moving the victim until first responders arrived to take over advanced care.

The victim has since recovered from the incident and expressed his thankfulness to those involved in the rescue.

“It’s nothing anyone else wouldn’t have done,” said Crilley in accepting the award.Â  Crilley also gave credit to his wife, who is a nurse and was also at the scene of the incident.

“There’s no way that I or anybody else could have been able to rescue this guy.Â  He was big, he was heavy, and the guy actually came back and told us a couple of months later after going through MRIs… the doctor told him that he was about a minute away from being brain damaged or not alive,” said Crilley’s wife.

Crilley is one of 50 nominees being considered for the national award (one from each state).Â  The national winner will receive an all expense paid trip to the National Awards Ceremony in Florida taking place at: Where’s the Fire exhibit at Walt Disney World where they will receive the award and a $10,000 grant for their fire department.

*** If you enjoyed this post,  you may also like our story on the dedication of Engine 13, named Ikua in honor of the famous cowboy from Upcountry, Maui.

Maui Boating Office to Close for Two Weeks and Relocate