Maui Marines joined keiki in the community to shop for toys this morning with funds raised during their annual Toys For Tots campaign.  The program partnered with Pacific Radio Group’s own KPOA 93.5 FM radio station, the Salvation Army, and the island’s Minit Stop stores to raise a total of $13,600.

Sgt. Brandon Benz-Marrs was among the group of marines that went shopping at the Kahului K-Mart this morning to buy toys for those in need in Maui County.

“It does feel awesome,” said Sgt. Benz-Marrs of “the feeling that you get knowing that you’re giving back to somebody.”

“A lot of families around Maui as well as myself, when I was younger, we kind of struggled.  And it feels good being able to give back to the people who are in that predicament.  Because you know later on in life that they are going to be the ones hopefully taking your place,” said Sgt. Benz-Marrs.

The program was started in the late 70’s by the wife of a marine who saw a need in her community and looked for ways to help.  That year, the unit collected about 5,000 toys.  Since then, the program has grown to over 600 communities across the U.S. contributing anywhere from 500,000 to 600,000 toys per year. 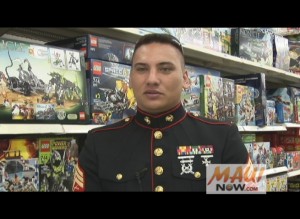 Sgt. Brandon Benz-Marrs joined island keiki in purchasing toys from the Kahului K-Mart this morning for the annual Toys For Tots fundraiser. Photo by Wendy Osher.

The funds raised on Maui were used to purchase toys that will be distributed to various social service agencies throughout the week.   Beneficiaries include the angel tree project, the South and West Maui chapters of the Boys and Girls Club of Maui, Imua Family Services, and the Kula Hospital in Upcountry, Maui, among other agencies.

The funds raised this year surpassed last years total and this year’s goal by more than $4,300 dollars.  The greatest amount raised was at the Wakea Minit Stop where donations totaled $3,600.

The fundraiser began the day after Thanksgiving and ran through December 18, 2009.  Residents were made aware of the need through radio announcements on KPOA 93.5 FM.   They were given the opportunity to contribute to the campaign by purchasing Toys For Tots gift tags that were then used to decorate the many Minit Stop Stores around Maui County.

“I’m happy to report that we have reached our goal and every child is going to have a Christmas,” said KPOA Program Director Alaka’i “The Morning Goddess” Paleka.