After nearly 100 years in the pineapple business, Maui Land and Pineapple Co. harvested its last pineapples from fields in Haliimaile and Haiku on Wednesday, December 23, 2009.

The company had announced plans earlier this year to lay off 285 workers and cease pineapple operations by December 31st.

Another 133 employees were to be offered work at partner companies.

The move is part of a structural change that is aimed at making ML&P more competitive, while improving operating efficiencies, and better positioning its Kapalua Resort for future success.

Workers called it a sad day, with some planning to apply for work with a new company and others planning to look elsewhere for employment.

Discussions are still in the works for the possible establishment of a new company to continue pineapple production on a smaller scale. 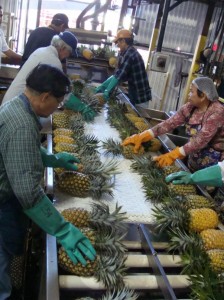 Workers at the ML&P Kahului Cannery work to process the company's final harvest on Wednesday. Photo by Wendy Osher.

During a recent meeting of the State Commission on Water Resource Management, Guy Fujimura, the Secretary-Treasurer with Hawaiiâ€™s ILWU Local 142 said, â€œThere is a successive company that is going to continue to grow pineapple on Maui and expects to use not only the assets in land and buildings, but also the water infrastructure to continue their cultivation.â€

MPC lost $115 million since 2002, in their agriculture business, while investing $20 million in capital expenditures for a new fresh packing facility.

Company officials called the decision painful, but necessary as the changes mark the end of a significant chapter in Mauiâ€™s history.