Construction for the second phase of the Market Street Improvement Project in Wailuku will begin next week Tuesday, January 19, 2010. The $2.5 million project is funded with stimulus money from the American Recovery and Reinvestment Act. 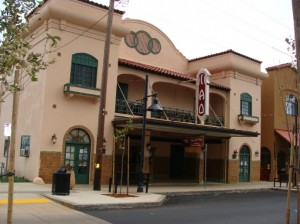 The Historic Iao Theater is one of the longtime businesses located along Market Street in old Wailuku Town. File Photo by Wendy OSHER Â© 2009

Work is slated for completion in December 2010. Â In the interim, work is scheduled each week, Monday through Friday from 8:30 a.m. to 3:00 p.m.; with some weekend work possible. It is anticipated that one lane of traffic will be kept open with local traffic access; traffic may be detoured through side streets during construction hours.

The project includes constructing a landscaped island to serve as a school bus stop at the intersection at Piihana Road; constructing new sidewalks, curbs, driveways, curb ramps and concrete sidewalks; installing new signs and relocating existing signs; and replacing the existing roadway with a new asphalt pavement section. The project also includes improvements to drainage systems by installing an underground system that will capture runoff from heavy rains on Market Street and release it into the Iao Stream, and the realignment of a segment of the existing waterline to accommodate the new drainage system.

Goodfellow Brothers is the general contractor, while Aimone-Martin Associates has begun conducting a survey of the structures along Market Street from Kahawai Street to Mokuhau Road before construction begins.

The announcement was made today by Mayor Charmaine Tavares and Public Works Director Milton Arakawa.