Maui’s mobile workforce just got faster with the launch of Oceanic Time Warner Cable’s 4G network in January. A celebration surrounding the product launch was held at the Wailea Marriott’s MALA restaurant, giving clients and businesses a chance to explore the new technology.

“The world of high speed is quickly becoming two things: more speed and more mobility,” said Nate Smith, the President of Oceanic Time Warner Cable (OTWC).  “This is just the next extension of that trend.  We’re introducing a high speed mobile service that’s going to be the fastest mobile service in Hawaii,” said Smith. 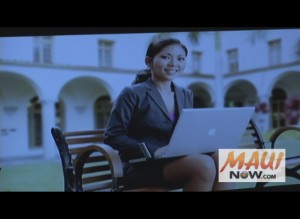 “What we are enabling customer to do is be able to take their service with them on the go,” said Fiorito.  “So they can purchase a data card from us, sign up for a rate plan, and have super-fast cable-like speeds on their laptop on the go. So now anywhere can be a hot-spot with Road Runner Mobile” said Fiorito.

Hawaii is the fourth location in the Time Warner system to launch the 4G service after the Carolinas and two locations in Texas.

The event included product launch giveaways, music by Maui’s own Willie K, and networking among Maui’s business and workforce. For more information on the new 4G service, visit oceanic.com or call 643-2337.