The name change was approved by the University of Hawaii Board of Regents during their monthly meeting held today on Oahu.  The change was proposed to accurately represent the college’s programs and services that now include 15 associate and two four-year baccalaureate degrees. 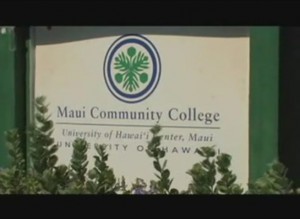 “The name University of Hawai‘i Maui College accurately reflects the college’s two-year degrees, certificates and continuing education programs,” said UH Vice President for Community Colleges John Morton. “At the same time, it represents opportunities to acquire baccalaureate degrees that are critical for accessing living wage careers for the residents of Maui’s multi-island county and the state of Hawai‘i.”

“The change will allow the college to be more competitive in the recruitment of students locally, nationally and internationally, as it clearly identifies an institution where students can choose to earn a baccalaureate degree,” said UH Maui College Chancellor Clyde Sakamoto. “As the college expands its partnerships, two- and four-year offerings, and geographical reach, it has become apparent that prospective students are often unaware of the growing degree and career opportunities that we offer.”

The name change also represents the approval of transfer of accreditation for the college from the Western Association of Schools and Colleges’ (WASC) junior commission to the WASC senior commission, which accredits four-year colleges and universities. This formally took place in October 2009.

“Our commitment to the open admissions philosophy will continue,” said Sakamoto. “We will continue to develop two- and four-year programs and educational opportunities in response to the changing workforce needs of our county, state and region.”

The name change will be immediately initiated and will be fully implemented in the 2010-2011 academic year. Signage at the campus will be temporarily updated until permanent signs can be designed and constructed for the two major entrances to the Kahului campus. Signs for the college’s educational centers in Lahaina, Hana, Kihei and on Moloka‘i and Lana‘i will be approached similarly, and all signage changes will occur over time as funds become available.

Pladera Promoted to Rank of Lieutenant at Maui Police Department