Preliminary ID Made on Body Recovered from Iao Valley

An autopsy will be performed later today (Thursday, February 18, 2010) on a body recovered from Iao Valley Wednesday afternoon. 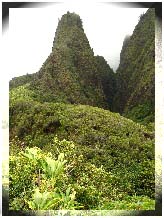 Preliminary identification of the victim was made based upon a driver’s license found nearby.  Authorities the autopsy will be used to confirm identity and should reveal circumstances surrounding the death.

Lt. John Jakubczak with the Maui Police Department Criminal Investigation Division said foul play is not suspected at this time.

Authorities say the body was discovered by a party that was hiking in the area.  Rescue crews hiked about 50 minutes into the valley to assist in the recovery effort.  The Maui Fire Department’s Air One Helicopter also assisted with the extrication, leaving the scene by around 6:45 p.m.