Proposed Auwahi Wind Farm at Ulupalakua could power up to 6,600 Homes

A company planning to construct a wind farm in Ulupalakua on Maui will hold two public meetings this month to gather input and provide information on the proposed project.

Auwahi Wind Energy LLC, a subsidiary of Sempra Generation, is developing the planned wind farm and battery storage project.  By capturing the island’s characteristically strong wind resources, the proposed project would generate approximately 22-megawatts of energy, enough to power up to 6,600 homes. 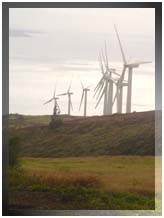 The meetings will be held from 6-8 p.m. on Tuesday, April 20 at the Kamalii Elementary School in Kihei, and from 5:30 to 7:30 p.m. on Wednesday, April 21 at the Ulupalakua Community Center at Ulupalakua Ranch.  Project representatives will be available to answer questions.  Comments from attendees will also be accepted at the meeting.

In addition to wind turbines, the proposed project would include a substation, operations and maintenance facility and related infrastructure, a 34.5-kilovolt (kV) transmission line and a construction access route along existing public roadways and pastoral roads.

According to the EA, approximately 95 percent of Hawai‘i’s primary energy was derived from imported fossil fuels in 2005.  In an attempt to alleviate its dependence on imported fuels, the State established Renewable Portfolio Standards, which require Hawaiian Electric Company and its affiliates, Hawai‘i Electric Light Company and Maui Electric Company, to generate renewable energy equivalent to 10 percent of their net electricity sales by the year 2010, 15 percent by 2015, 25 percent by 2020, and 40 percent by 2030. In addition, the state signed a Memorandum of Understanding with the U.S. Department of Energy on January 28, 2008, that established the Hawaii Clean Energy Initiative, under which at least 70 percent of Hawaii’s energy needs would be supplied by renewable resources by the year 2030.

VIDEO: Uhane Pohaku, The Spirit of the Stone