Maui Halau Ke’alaokamaile under the direction of Kumu Hula Keali’i Reichel swept the wahine hula titles at the weekend Merrie Monarch Festival in Hilo.  The 47th Annual event included a solo competition and men’s and women’s divisions for traditional and modern hula. 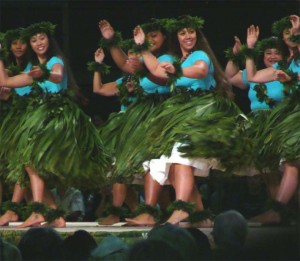 Eighteen women from the halau performed He Mele Inoa No Pekipeki Pusiela Keli’i’aukai for the kahiko or traditional hula.  The song was a mele inoa or name chant comparing the travels of a 19th century ship to the skills of a lover unequaled at navigating the sea of passion.

The ‘auana or modern hula, Ke Aloha, spoke of the power of enduring love.  The song was composed by Lei Collins and set to music by Maddy K. Lam.  Ke’alaokamaile took first place honors in both wahine categories, overall wahine honors and 2nd place in the overall category for men and women. 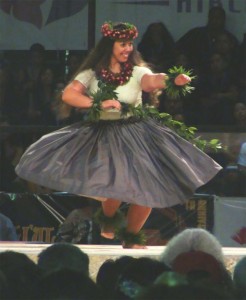 The halau’s contestant for Miss Aloha Hula, Oralani Koa, placed fourth in the solo division and was honored with a $1,000 Hawaiian Language award from the Office of Hawaiian Affairs.  Koa performed a kahiko to Ku’u Lei ‘Awapuhi, a hula standard that asks, “Where are you oh beloved ginger blossom of the misty rain?”  Her ‘auana hula, I Waikapu Ke Aloha described the famous central districts of Maui known as Na Wai ‘Eha.  The hula depicted the Kokololio wind of Waikapu, the Lawe Malie wind of Wailuku, Wai’ehu’s Ho’eha ‘Ili Wind, and Waihe’e’s Kili’o’opu wind.  The four together, with the Kaua’ula wind of Lahaina are elements of beauty that are tied closely to the land. 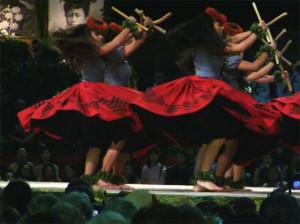 Also competing from Maui were the women of Halau Na Lei Kaumaka O Uka, under the direction of na kumu hula Napua Makua and Kahulu Maluo-Huber of Kula, Maui.  The halau danced to ‘O Pupuhi Ku Kalani in the kahiko division, honoring Kamehameha V, Lot Kapuaiwa.  In the auana division, the halau performed a hula to Aia I Lihau Ko Lei Nani.  The song was a mele lei for the Chiefess Kapi’olani that speaks of a garland of lehua blossoms at Lihau that was presented lovingly to the high-born Queen.  The halau’s solo dancer, Jade Kealani Snow was among the Miss Aloha Hula contestants that performed on Thursday night.