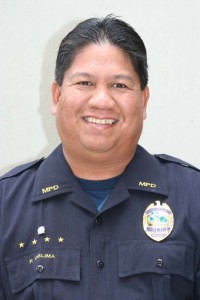 Sergeant Peter Delima of the Wailuku Patrol School Resource Officer Program will be assigned as the District Commander of the Lanai Patrol District under his new post as Liutenant.  Delima is a 25-year veteran with the department.

He began his career with the Maui Police Department as a patrol officer in Wailuku Patrol, Molokai Patrol and Lahaina District.  He was assigned to the Criminal Intelligence Unit, where he served 5 years.  Following his promotion to the rank of Sergeant on January 1, 1995, he was assigned to the Criminal Investigation Division, Internal Affairs, Vice Division, and lastly the School Resource Officer Program.  He is also the team leader with the Department’s Hostage Negotiating team. Delima is married with two children. 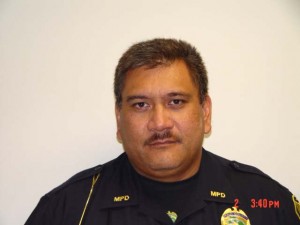 MPD's Leighton Kanaele was promoted to the rank of Lt. Photo courtesy MPD.

Sergeant Leighton Kanaele of the Plans Training, Research, and Development Section was also promoted.  The Maui native and 24-year veteran of the department will be assigned as a Lieutenant of the Molokai Patrol District.

Kanaele joined the Department in 1986 and was assigned as a Patrol Officer in Wailuku and transferred to the Traffic Section in 1992 where he works in the D.U.I. Task Force and served as a Traffic Accident Investigative Specialist.  Following his promotion to the rank of Sergeant in 2001 he served 8 years and 9 months in the Plans, Training, Research, and Development Section.  Kanaele is an instructor for the Department’s Laser Certification, Firearms, and Emergency Vehicle Operations Course.