Firefighters remain on the scene of a blaze that has burned 1,100 acres since it was first reported on Monday afternoon.  The fire was not yet contained as of 5 p.m. Tuesday.  Firefighters continue mop-up efforts along the Honoapiilani Highway and have set up a fire watch overnight.  Aircraft are expected to continue water drops until sunset. 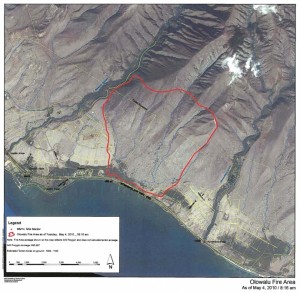 Satellite photo of Olowalu area with overlay of fire trace as of 8:16 a.m. this morning. Image courtesy: County of Maui GIS

Five helicopters along with 25 firefighters and 15 wildland firefighters battled the blaze throughout the day.  Acting Operations Assistant Chief Derrick Arruda noted that a number of fire breaks were established today, and that fire crews would be reduced during the night.

Fire fighters were assisted throughout the day by Maui Police officers, and with bulldozers and water tanker trucks provided by the County of Maui Public Works Department, Goodfellow Bros., Inc., and West Maui Land Company.

Of the estimated 100 people who were evacuated from Olowalu overnight, three sought shelter at the Lahaina Civic Center.  The shelters remain in standby mode until further notice.

No injuries were reported. County officials say the flames came close to an unoccupied home under construction, but it was spared any significant damage.

Chief Arruda expressed the department’s appreciation to the community for its support, which included bringing food and refreshments for fire fighters.

H1N1 was confirmed in Hawaii one year ago today