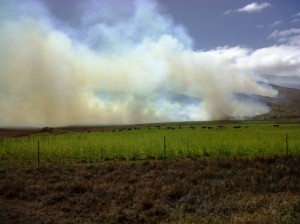 Heavy smoke continues to be a factor in the commute along the pali and Maalaea sections of the Honoapiilani Highway. The road remained open in both directions Wednesday morning, but is subject to intermittent closures if necessary. Photo courtesy County of Maui.

Fire officials report that at daylight this morning, an estimated 2,300 acres have been burned. 26 firefighters remained on scene last night. 4 helicopters will return to assist fire crews with water drops. The 2 Black Hawk helicopters requested by Mayor Tavares yesterday completed their assistance and returned to their Big Island base. They will be requested again should it be necessary today.

Fire crews will focus on preventing the brush fire from advancing further on the Ukumehame side of the perimeter. The fire is reported to be approximately a half-mile from the roadway.

No injuries were reported from last night’s operations. The firefighter that was transported to Maui Memorial Medical Center for smoke inhalation was treated and released.

The Fire and Police Department wishes to thank the Salvation Army for organizing meals and water for personnel yesterday and through the night.

VIDEO: Mayor Tavares says she will not sign the Council’s version of the FY 2011 budget