Fire officials have called the flare-up extinguished at 3:00 p.m. An estimated one acre was burned. No injuries or damage to structures are reported. Maui police re-opened South Alu Road at shortly after 3:00 p.m. There were no evacuations ordered of the area.

AUGUST 9, 3:11 PM: S Alu Rd, in Wailuku on Maui is now OPEN. It was closed earlier this afternoon because of a flare up of the Kehalani fire.

A brush fire  located near the Kehalani Subdivision in the Wailuku Heights area that started just before midnight on Thursday, August 5 and was called extinguished by fire officials Saturday evening, flared-up today.

Fire engines from the Wailuku and Kahului stations responded to today’s flare-up that was reported at 12:29 pm on South Alu Road. Maui Police closed South Alu Road between West Main Street and Palani Street of the Wailuku Heights area during the incident. Air One assisted with water drops and no structures are reported damaged.  Fire crews are still on scene. 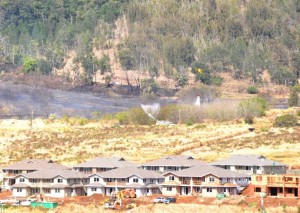