The public is invited to attend an informational session on brown tree snakes and the potential adverse impacts they can have to a community. The free workshop will be held Wednesday, August 25, 2010 from 6-9 p.m. at the Kahului Community Center Annex located at 275 Uhu Street in Kahului. Live snakes and other prohibited species will be on display, and participants are asked to bring a flashlight for use in a snake detection exercise using dummy snakes. 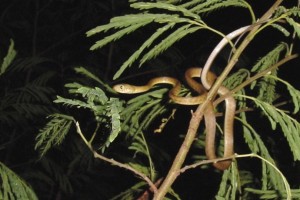 The session will provide information about the snakes, their biology and behavior, why the public should be concerned with their possible introduction here, and what to do if a snake is sighted.

Because of a significant U.S. military buildup on the island of Guam and the frequent movement of goods between Guam and Hawaii, there is an increased threat of the introduction of the snakes here in Maui County and the state. The brown tree snake is adept at hiding itself in small spaces during the day, and is easily concealed and inadvertently transported in cargo shipments. A partnership of state and county agencies is presenting opportunities for the public to learn how to help prevent the brown tree snake from taking root here.

“It’s important that as many people as possible become educated about the hazards that our county could face if brown tree snakes became established here,” said Mayor Charmaine Tavares. “Our local economy, public health and the safety of our community could be impacted. The experiences of Guam with brown tree snakes causing power outages, eliminating native bird populations and affecting agriculture and poultry industries are valuable lessons for us to learn from.”

Brown tree snakes on Guam climb power lines and have caused more than 1,200 small to island-wide power outages over the past 30 years, costing millions of dollars in repairs costs, lost revenue and work productivity. Researchers have determined that similar impacts to Hawaii’s energy, tourism and medical industries could cause conservatively estimated losses of $578 million annually. Hospitals on Guam treat about 150 victims of brown tree snake bites each year, the majority of which are infants and toddlers; the tree snakes also cause irreparable damage to ecosystems by wiping out native bird populations, driving up insect populations and affecting agriculture and poultry.

The workshop is appropriate for all ages, and is sponsored by the Office of Mayor Charmaine Tavares, the State Department of Agriculture, the State Division of Forestry and Wildlife and Maui Invasive Species Committee (MISC). Similar training sessions are being held for State and County employees, Matson and Young Brothers, tree trimming companies, all cruise ship lines that include a port of call on Maui, Maui Electric Co. and non-profit organizations that do conservation work.