Introduction: Aloha, my name is Netra Halperin.  I’m running for State House, South Maui.  I am a psychotherapist.  I have a Masters in Psychology and I worked at Aloha House, Women Helping Women, Maui Youth and Family Services; also, I’ve owned small businesses in the renovation and tourism industries.  So I’m very familiar with business and the hurdles that small business must jump through in Hawaii.  I am running because I really want to make a difference.  Ever since I was a social worker 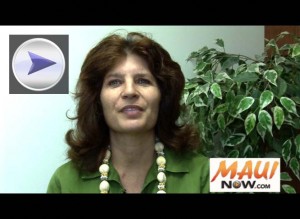 –ever since I was young–I looked around and I saw a lot of injustice and a lot of things that were not working in the best interest of people–basically a lack of love.  This country–the culture–is way too much based on money instead of working together and helping each other.  I have some really concrete solutions on how to create win-wins.  I’ll be talking about the quadruple bottom line, which is a really good way of deciding which is a good criteria for each decision, and to make decisions that are going to be in the best interest of everyone.

Medical Marijuana: Are in support of or against the legalization of medical marijuana dispensaries or compassion centers in Hawaii?  Answer: I support the legalization of marijuana because the reality is, the majority of people using marijuana are actually recreational–as are the majority of people who drink alcohol–doing it for recreational reasons.  I think its disingenuous to do this compassion center.  Of course I think people need marijuana medically should have it, but I think just doing the compassion centers is a game.  It’s a huge big game and it’s going to create a lot of fraud because people are going to pretend and try to get doctors to give them a medical marijuana pass.  Marijuana is no more harmful than alcohol as far as violence, as far as drunk driving–which are the main problems of drugs basically.  I think it should be legalized and taxed and regulated.  We’re not going to get all of the tax–some people will grow it–but a lot of people aren’t.  A lot of people buy things.  People could grow corn, but they don’t.  There’s going to be a certain amount of taxes received from that and we can make it just like alcohol–no one under 18 and regulated.  Because when you make something illegal, it creates a whole host of problems that weren’t there before.  Yes, people driving drunk is a bad thing.  People getting drunk and beating up people is a bad thing.  But we tried prohibition and it didn’t work.  So the best way to get rid of drug addiction is to make reality better.

Education reform/locally controlled school boards: What is your stance on locally controlled school boards? Answer: I definitely support locally controlled school boards.  It’s on my website.  It’s on my brochures.  I think there’s so much bureaucracy in our schools system.  We’re the only state in the whole nation that has a one central state school board.  Education is not the same as Walmart.  Education is about human beings; it’s about creativity; it’s about inspiration; and it’s about innovation.  So I do not believe in the standardization of education; I believe in the customization.  People, when they have control over their own organization, they take more responsibility.  It’s that same thing–that the more power you have, the more possibility of taking control and making it something exciting and amazing and prosperous.  I believe in giving the communities–each school community–the control over their own school.  Now, some of the schools are going to need training on how to do that.  It’s the conversion charter school model.  Some of the schools are going to need… basically it’s a self assessment tool.  Any conversion charter school has gone through the self assessment.  This is actually paid for by the federal government.  So any school that wants to be a conversion charter school can apply for those funds and get that to help them create a functioning school that is based on the values of that particular community.  Like for instance in Hana it might be more Hawaiian based; In Kihei, maybe we could bring in the Arts like they do at Pomaikai School.  So each school community can have a school that really reflects their constituents and then people will get excited and that’s the bottom line of education–excitement and innovation and creativity.  Kids automatically want to learn.  They’re curious.  Everybody’s always saying, “don’t touch that,” so let’s give them something to touch.  Let’s give them something to really sink their teeth into and get excited about.

Superferry: Given the current economic climate, would you support the return of the Hawaii Superferry to help stimulate interisland commerce? Answer: Yes, definitely.  When I worked in the legislature in 2009, I put all my stuff in my car, took it over easy; and then by the time I returned home in May, I had to ship everything and it was a big hassle.  I also support a lot of trades people.  They can put on their truck, all their tools, what they need, and then go over and work.  Or for families that want to put on their ice chests and all of their camping or recreational paraphernalia and take it over.  So definitely, we need a ferry.  What we need to make sure is one, that the EIS is done, and two, that it is not heavily subsidized by the taxpayers.  I think it needs to be able to pull its own weight, basically.

Transient accommodations tax: If elected to serve, what would you do to ensure that Maui keeps its share of the Transient Accommodations Tax? Answer: I would work with Representative Marcus Oshiro, who’s the chair of finance, who I know from working over there, in 2009.  What I would show him is other ways that we could save a lot of money.  One of the ways that our state is wasting a ton of money is the methamphetamine crisis is costing Hawaii $400 million a year.  Think of what we could do with $400 million.  I’m working with an organization that I’ve been in communications with.  It’s called Justice Reinvestment–and what they do is come in and do a data-driven analysis of a community’s criminal justice system, and they show how to take money out of the black hole of incarceration and put it into the communities from which most vendors come.  That’s going to save a ton of money.  Texas, I mean nobody thinks Texas is liberal, but they are working with this organization and they’ve already saved $233 million.  So if they can do it, we can do it.  So basically, the answer is, I would tell Marcus, “Look, we don’t need to take away the county’s TAT.  I can show you a much better way to save money.”

Closing thoughts: I’m really excited about this race.  I’m really excited about the possibility of representing Kihei in the legislature.  I guarantee you I will give it 110%.  I have been giving this campaign 110%.  Every single day I’m out there walking the neighborhoods and I’ve been meeting really awesome people in South Maui.  And then I know what they believe in; I know what they want, what their goals, their hopes, their dreams are.  So then, when I am serving this district, they’re going to all be there right beside me.  And I can feel them.  I can feel (them saying), “Please do this; we’re concerned about this.”  I’m really excited about this.  My website is www.electnetra.com.  Please go check it out.  There’s a very cute video of me and my lovely cat.  So please check that out and email me or call me if you have any concerns because I’m here to represent.  I’m a public servant.  And so I want to know what you think, what you feel, what you think is important, and I will always listen.