Two Maui firefighters, Norman Campos and Guy Danley, were promoted to the rank of Captain.  In making the announcement, Fire Chief Jeffrey Murray said, “Each firefighter has extensive experience at multiple fire stations, and has displayed the leadership skills ability to guide the personnel assigned to their watch. I have the greatest confidence in each of them as both firefighters and leaders,” said Murray. 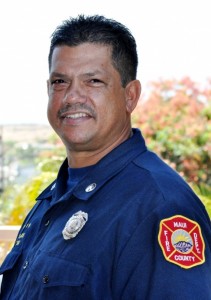 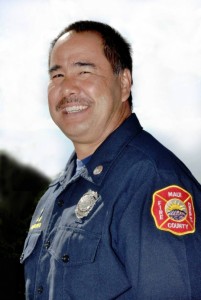 Since joining the department 23 years ago, Norman Campos has worked at the Wailuku, Pukoo, and Kihei fire stations.  Campos started his career in 1987 after graduating from Baldwin High School in 1983 and serving in the U.S. Army from 1983-1986.  Campos worked at the Wailuku Fire Station and the Kihei Fire Station before taking on an assignment at the Pukoo Fire Station on Molokai.  His most recent assignment was at the Kihei Fire Station where he served since 1995.  Campos and his wife Tammy have a son, Norman Campos Jr. (“Oli”), and a granddaughter, Kuumomimakamae Campos.

Also promoted was 18 year veteran of the department, Guy Danley who joined the department in 1992.  Danley began his career at the Wailuku Fire station where he served until his promotion to Driver (Firefighter III) in 2000 and was assigned to the Kahului Station.  Danley will carry out his new promotion to Captain at the Napili Fire Station where he began work last week.  Danley is a Hazardous Materials (HazMat) technician and has received extensive training in wildland firefighting. Danley and his wife Uilani have a daughter, Anela, and a son, Leighton “Kai.”

*** If you enjoyed this post, you may also like our story on new firefighting equipment for the Hana Station.