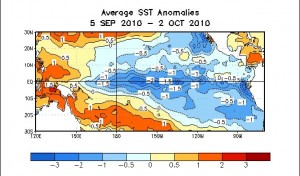 Several disturbances were closely monitored, though none developed into a viable tropical cyclone. All residents and visitors are reminded hurricane season does not end until November 30 and late season tropical cyclones are still possible. Everyone in the State of Hawaii is urged to maintain preparedness throughout the year.

El Nino/La Nina Update: Beginning in May 2010, the sea surface temperatures across much of the equatorial Pacific entered a cooler than normal phase, signaling the onset of La Niña. La Niña conditions currently exist across the equatorial Pacific with water temperatures about 2 – 3 degrees F below normal. Moderate to strong La Nina conditions are expected to last at least through the northern hemisphere winter 2010 – 2011.
On the Web:
NOAA Climate Prediction Center: http://www.cpc.noaa.gov/
NOAA Central Pacific Hurricane Center: http://www.weather.gov/cphc/