Breadfruit Recipes that’ll Leave you Coming Back for More 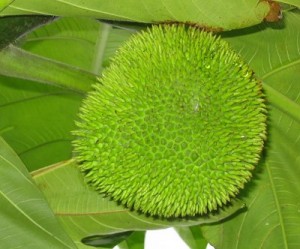 If you live on the Islands, you no doubt are more than familiar with the beautiful breadfruit, which is a member of the mulberry family. Breadfruit, often referred to as ulu on the Islands, has been a staple of South Pacific diets for thousands of years.

Breadfruit trees are large producers, as it is quite common to have one tree (which can reach 85 feet tall!) yield as many as 200 fruits per year. Breadfruit, which is best picked and eaten in its ripened state, is eaten by running it under water as to remove the latex. Many individuals also oil their knives as to prevent it from sticking to the latex when cutting.

Because breadfruit has become such a mainstay in the diets of Hawaiians, it can be prepared in any number of ways, from mashing it, creaming it, pureeing it, baking it, roasting it, and frying it. In addition, it can replace potatoes in many recipes, such as in soups and chowders.

Perhaps one of the simplest ways to preparing breadfruit is to cut into small chunks and fry them until you achieve tender pieces. Once you remove them from the fryer, mash them with a spatula and stick them back into the fryer until they are crisp and brown.

The National Tropical Botanical Garden, each year, holds it Breadfruit Cookoffs in Hana, Maui, where visitors can get a glimpse of some of the fantastic recipes that can be made from this locally grown fruit. Here’s a list of our favorite past winners of the Breadfruit Cookoffs:

To prepare breadfruit chips, cut up the breadfruit into small, one-inch chunks and boil them in the oil, along with the salt and chili pepper. Deep fry breadfruit until it has achieved a nice golden brown color. Sprinkle with desired spices.

To prepare, cut the ahi into pieces and chop the seaweed up into very small pieces. Combine all ingredients and mix in a large bowl. Chill and serve.

Mix all ingredients together, except for the wonton wraps. Fill each wonton wrap with two spoonfuls of filling. Moisten ends of wonton wrap with water and fold the wrap diagonally and seal. Deep fry filled wraps until they have achieved a golden brown color. Dip into sauce of choice. Try hot mustard or sweet chili sauce.

All About Hawaii’s Kabocha Squash

Yummy Super Fruits That are Good for You