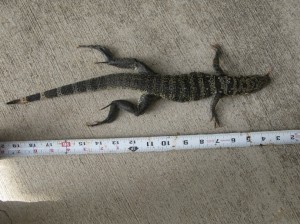 An illegal tegu lizard was found in Waianae Friday night. The foot-and-a-half long dead lizard was discovered by a resident after her dogs apparently killed it. Herpetologists at the Bishop Museum identified the lizard and plan to keep it for the museum’s collection.

Tegu lizards are native to South America, but are found in the pet trade worldwide. It is not known how the lizard arrived in Hawaii. They can grow up to five feet long and pose a threat to both ground nesting birds and crops. Agricultural officials say the lizards can pose a source of bacterial contamination of food crops. Their bite can also cause serious bacterial infections.

The resident who reported the lizard to officials on Saturday, said she heard her dogs barking Friday night and discovered the dead lizard. She was asked to hold it for agriculture inspectors, who picked it up on Monday morning.

Individuals who see or have knowledge of illegal animals should call the State’s toll-free PEST HOTLINE at 643-PEST (7378). Those harboring illegal animals are encouraged to turn in the animals under the State’s amnesty program, which provides immunity from prosecution. Illegal animals may be turned in to any HDOA Office, Honolulu Zoo or any Humane Society – no questions asked and no fines assessed. 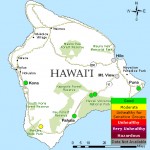