Experts from the University of Hawaii at Manoa’s Department of Meteorology said Friday that the radiation risk for Hawaii from the Japan nuclear plant is “extremely negligible”.

In a statement released by the University of Hawaii, Dr. Thomas Schroeder, director of the Joint Institute for Marine and Atmospheric Research, and professor Steven Businger of the Department of Meteorology, lead scientist for the modeling of vog dispersion from Kilauea Volcano, explained that Hawaii is safe from potential threat from the situation at Japan’s Fukushima nuclear plant.

According to the scientists, at least three main reasons exist to keep Hawai‘i safe from this potential radiation threat.

First, the highest altitude of the plume of radiation is no higher than 5,000 feet, and the low-level winds from Japan show no particle tracks aimed near Hawaii.

Second, the jet stream is not a factor in the situation as the event is occurring at low elevations.

Three, the fact that there is a very long geographic distance between Hawai‘i and Japan is a very important factor.

Dr. Schroeder further explained in the statement that “according to dispersion models, any radiation from the plume will be dispersed into a very wide area, and as it diffuses and spreads, the concentrations become lower and lower. As it is diffusing and spreading over the Pacific Ocean, the rain is also another benefit, which helps to cleanse the radiation out of the atmosphere.”

Additionally, the UH scientists pointed out that the air mileage from Tokyo to Honolulu is slightly more than 3,800 miles, causing the plume to be spread over a much greater area. The U.S. government has determined that the risk zone for the Fukushima plant is within a 50-mile radius.

In the statement, the UH scientists also likened the situation at the Fukushima nuclear plant to a “smoke stack at a power plant”, as opposed to “tragedies such as the Chernobyl nuclear accident and the bombing of Hiroshima”. Faculty at the UH Sea Grant College Program cautioned the public to look at this from a scientific perspective and pointed to sources at the U.S. Nuclear Regulatory Commission for further research and information. 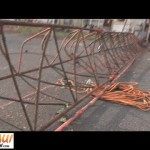 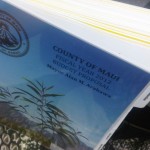