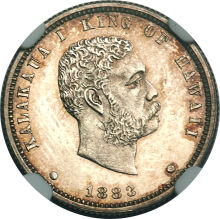 Two rare Hawaiian coins are among the items featured at an online auction that closes next week Wednesday, April 27, 2011.

The 1883 eighth dollar coin was a proposed denomination that was never issued for circulation.

Only 20 coins were struck for inclusion in proof sets, and perhaps half that number survives today, according to auction authorities.

The cameo coin featuring Kalakaua on the face and the word hapawalu on the back is posted with a current bid of $23,000. 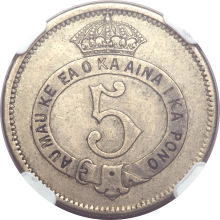 Eric Gilliom Performs at Stella Blues for Two Nights Only