According to the US Department of Transportation (DOT), Hawaiian Airlines is still the nation’s #1 on-time airline for an eighth straight year.

For 2011, Hawaiian averaged a 92.8% on-time performance ranking #1 in 11 of the 12 months and exceeding the industry average for the year by 13.2%, according to the US Department of Transportation’s Air Travel Consumer Report issued today for December and the full year 2011.

For the month of December, Hawaiian’s on-time performance was 91.05, ranking second to AirTran Airways at 91.9%.

“To achieve a nearly 93% on-time rate over the entire year reflects the dedication that Hawaiian’s employees bring to the job every day to provide our customers with the very best in service and reliability,” said Mark Dunkerley, Hawaiian’s president and chief executive officer, in a written statement.

“We congratulate AirTran Airways for earning the top spot in December and we look forward to the challenge of regaining that position in 2012.”

The DOT report is available at http://airconsumer.ost.dot.gov/reports/atcr12.htm. 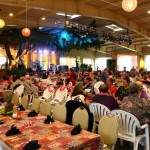