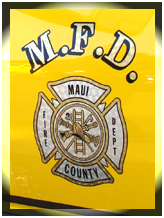 The blaze destroyed a 200-square-foot structure, and brush in the area of Hahana Road.

Crews responded to the incident at 2:53 p.m., with firefighting efforts hampered by limited access and steep terrain.

No injuries reported, and the cause of the fire is undetermined at this time.