Hirono Sworn in as 1st Asian-American Woman to US Senate 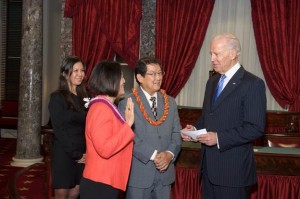 Mazie K. Hirono was sworn in today to the US Senate after being elected to the body by a 25 point margin in November.

“Today is about the people of Hawai’i, and I am honored to serve as a strong voice for our state in the United States Senate,” said Hirono in a statement today. “Now more than ever, we need leaders in Washington who are focused on helping the people of our state and country.”

Hirono becomes the first immigrant woman and first Asian-American woman to be elected to the chamber. Born in Japan, Hirono immigrated with her mother and older brother to Hawai’i under difficult circumstances. After graduating from law school, Hirono served the state as a deputy state attorney general, a member of the state Legislature, lieutenant governor and member of Congress.

In reflecting on the position, Hirono said, “It has been a privilege to serve with Senators Inouye and Akaka, and I look forward to building on the strong foundations they have laid. I will continue to work closely with Hawaii’s delegation to ensure that the state’s interests are represented on the national level.”

“The people of Hawaii have put their faith and trust in me, and I will not let them down,” she said. 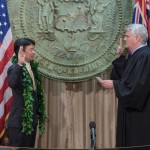