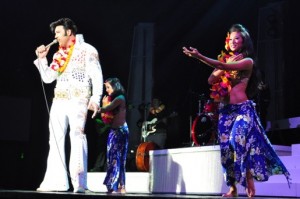 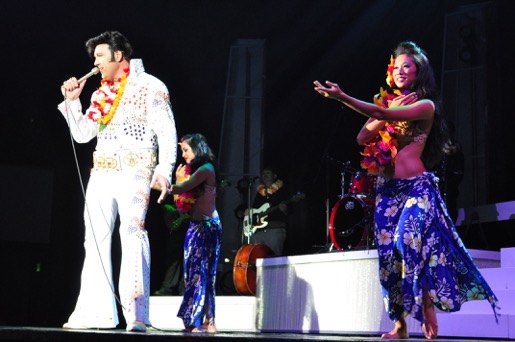 Tickets are $10 (with valid Hawai‘i ID) and kids 12 and under are free with a paying adult.

A $5 donation from each special ticket sold will be split between Maui Food Bank and Wounded Warriors Project.

Wounded Warrior Project advocate Terry Fator, star of the number one show in Las Vegas and NBC’s America’s Got Talent season two winner, will be on Maui next week and is scheduled to attend one of the benefit nights as a special audience guest. Comedian Fator donates 100% of proceeds from his show’s retail merchandise to the organization.

Wounded Warriors is a nonprofit organization. Its mission is to foster successful, well-adjusted wounded service members through customized assistance and awareness programs.

“In 1961, Elvis hosted a benefit concert at Pearl Harbor and donated proceeds to help build a memorial to the USS Arizona, and even paid for his own ticket,” said Mike Kattawar, executive producer of Burn’n Love. “He supported our military service men and women, and we hope to do the same with contributions to Wounded Warriors Project.”

Burn’n Love on Maui has supported Maui Food Bank since the show opened in December 2013 and through its nightly donations and special fundraising events, has helped feed over 50,000 meals to Maui county residents so far.

Hawai‘i residents (with Hawaii ID) may purchase these specially priced tickets, normally $60 and higher, by calling Maui Theatre at (808) 856-7900 [2]. Customers must mention “Elvis Lives” when reserving seats and are encouraged to reserve seats early as the shows are expected to sell out.

Regularly, Burn’n Love runs every Monday, Tuesday, Thursday and Friday at 7:30pm at the Maui Theatre. Tickets range in price from $59.99 to $109.99 for an all-access pass. For more information, go online [3].

About Burn’n Love
Burn’n Love is a dynamic live music production that takes audiences on a musical journey through Elvis Presley’s Hawai‘i. It was created specifically for the islands and captures “The King’s” time in Hawai‘i and Hawai‘i’s influence on his life, movies and music. It has been called the “most authentic Elvis show ever” and features a live band, six dancers, over 28 songs and a countless costume changes.

Burn’n Love was voted “Best Show on Maui 2015” by Travel + Leisure Magazine and Entertainment Mogul Tom Moffatt calls it the “best new show in Hawai‘i in years” noting that he “actually thought he was watching Elvis.” It is ranked the “No. 1 Show on Maui” by TripAdvisor, the world’s largest travel website, and showcases Elvis’ No. 1 hits as well as his legendary outfits, hip-shaking dance moves and irresistible charm.

In July 2015, Burn’n Love opened a second show in Waikiki, O‘ahu. Located at the Holiday Inn Resort Waikiki Beachcomber, it stars award-winning Leo Days and a stellar cast of musicians, vocalists and dancers. Burn’n Love Waikiki is currently the “No. 1 Show in Honolulu” on TripAdvisor.

More information can be found online [3].