Huliau Film Screening: “Voyage: Into the Depths of Kanaloa”

The Huliau Film and Lecture Series at Kamehameha Schools Maui features “Voyage: Into the Depths of Kanaloa” on Thursday, Feb. 18, 2016. This event is free and open to the public. 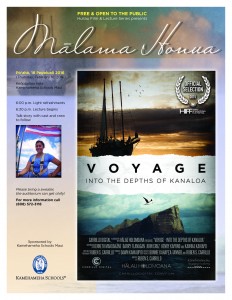 1500 Mile Journey of a Lifetime: This coming of age film captures the history making voyage of 14 students from Hālau Holomoana on a 1500 mile journey of a lifetime. Lead by Bonnie Kahape’a-Tanner, the students train for months to prepare themselves for a 10-day open ocean sail to Papahānaumokuākea. A dream that began years before would be realized aboard the 96-foot schooner named Makani Olu.

Three High School Seniors Transformed:  The film chronicles the transformation of three high school seniors. For one a struggle to find himself leads to a confrontation with the law and would threaten his chance of boarding the vessel. For another, his love of the ocean would become his career of choice. And the third, she would experience a deep unexplainable connection to her ancestors, unable to describe the sense of feeling at home in a place more than 400 miles away from the only home she had ever known.

The voyage named Ola I Ke Au A Kanaloa charts a course leaving the security and familiarity of home into a realm they had only studied about, challenging even the strongest of them. Along with modern instrumentation students used traditional way finding techniques steering by the stars and swells.

Cinematographer Ruben Carrillo uniquely captures this story. Father to one of the 14 students on board the vessel, Ruben shares with intimate detail the struggles and triumphs of this life changing voyage into the depths of Kanaloa.

The film will be shown free of charge at 6:30 p.m. on Thursday, Feb. 18, 2016 at Keōpūolani Hale on the Kamehameha Schools Maui campus in Pukalani.  Light refreshments will be available at 6 p.m.  There will also be a talk story session with cast and crew to follow. 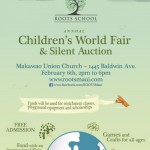 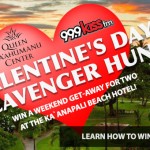