Kayaker Rescued Off of Olowalu

West Maui fire crews responded to an overturned kayak and reports of two people in the water about a half-mile from shore in Olowalu at 4:46 p.m., on Saturday, June 18, 2016.

At 5 p.m., Lahaina firefighters arrived at milepost 14 on Honoapiilani Highway and met with a 40-year-old female visitor that had been on the kayak and swam back to the beach on her own.

Her friend, a 40-year-old Lahaina man, was still with the kayak, according to department reports.

Through binoculars firefighters could see him about a half mile out and lying down on the kayak, which was still being blown out to sea by 20-25 mph winds.

A Lahaina Ladder crew launched their rescue boat and made it to the man at around 5:40 p.m.

When rescuers’ reached the Lahaina man, he was over a mile out.

They brought him and his kayak aboard and took him back to the Mala Wharf boat ramp in Lahaina.

The man was exhausted and had aspirated some sea water while staying with the kayak so firefighters treated him with oxygen and requested paramedics meet them at Mala boat ramp, according to fire officials.

The man was evaluated by medical personnel and released at Mala boat ramp after his female companion arrived to pick him up.

The couple was fishing from the kayak, but when they reached the wind line, they couldn’t paddle back against the stiff offshore winds.

They lost both paddles after the kayak flipped over. The man swam back to the kayak, but the woman chose to swim to shore.

The Maui Fire Department offers these safety tips when participating in ocean
activities from the shoreline.
• Always wear a Personal Floatation Device when using a standup
paddleboard, canoe, kayak, personal watercraft, or boat.
• If you fall into the water, staying with the watercraft is always your best
chance for survival and for being found. The watercraft makes for a bigger
target to see, and keeps you afloat.
• Know the weather and wind patterns of the area before you go in. If winds
are calm, learn when they are expected to move in, and be sure to be back
on shore before that time.
• If winds have already filled in, and you are inexperienced in the beach
activity, stay close to shore and far enough inside of the wind line, or go
another day. 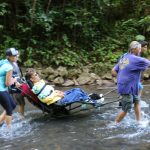 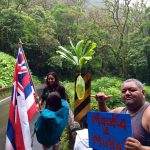