Two visitors were rescued from a rock outcropping at Waiʻānapanapa in East Maui after encountering a parch of rough water on Thursday afternoon.

Maui Fire Services Chief Edward Taomoto said a 39-year-old man from Ontario, Canada was not a good swimmer and opted to climb onto the rock island for safety.

A 41-year-old Australian man waited with him and signaled to people on shore that they needed help.

The two men were family members vacationing on Maui and started their swim at the area’s black sand beach.

They were brought to shore by a Hana firefighter who paddled out on a surfboard.

Both men were treated by paramedics on scene for minor lacerations to their legs that were sustained from climbing up onto the rocks. 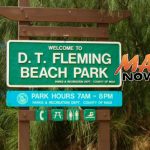 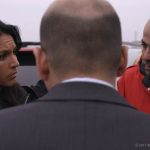