Malika Dudley LIVE from the Celestial Cinema at Maui Film Festival for Kuleana – movie world premiere! Director, writer, Brian Kohne introduced the movie, the cast and spoke about making the film right here on Maui. With the exception of 2 or 3 people, all cast and crew was from Hawaii. Kohne invited anyone who was involved with the making of the film to come up and be recognized with several dozen responding to the request and standing beside him on the stage. The Celestial Cinema was packed with chairs and blankets extending as far back as the vendor booths up top. 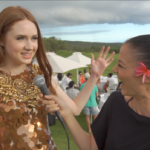 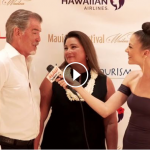