Officers from the Maui Police Department volunteered their time to make the holiday wishes of a few children come true.

The event, which was sponsored by the Kiwanis Club of Kahului in partnership with Friends of the Children’s Justice Center of Maui and Target, brought joy to the faces of young children as they went Christmas shopping with Maui’s finest.

Implemented in 2004, the event was held annually at K-Mart however, when K-Mart shut down on Maui earlier this year, the General Manager of Target Kahului agreed to host the event.

“When I was approached and asked if we’d be interested in this event, I immediately said yes,” said Kahului Store Leader Scott Hayes. “It’s a national event across the country and Target is really involved with this with all our stores. I really wanted to have the chance being on Maui to host this event and this was the first year we had the opportunity to do that.”

“The Christmas stuff is great but the ultimate behind the scenes opportunity is for these kids who probably have had less opportunity meeting officers, to see that police are our friends,” said Bruce McDonald of Kahului Kiwanis Club.

“This is probably one of the most emotional parts about my job is today,” said Paul Tonnessen of Friends of the Juvenille Justice Center. “I’m getting emotional because I know and I’ve watched and I’ve been in Child Family Services and watched children screaming as the police had to do something, but to watch the whole change in dynamics with these kids it’s really important to me.”

“Today, one of the boys who did not want to go with the officer said at the end of the shopping, ‘I’m going to be a police officer,” Tonnessen added. “It’s to break that stereotype and to build a relationship,” he concluded.

“It’s a happy occasion, and most of the time when we get involved it’s not very happy, but this is a happy time for our kids,” said Elladine Olevao from Child Welfare Services. 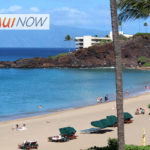 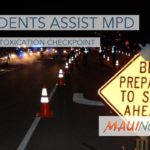