Rep. McKelvey Calls on Governor to Intervene on Lahaina Roadwork

Rep. Angus L.K. McKelvey of Maui presented a letter to Gov. David Ige formally requesting that he intervene and stop a Hawaiʻi Department of Transportation proposal that includes last-minute changes to the Keawe Street intersection of the Honoapiʻilani Highway in Lahaina, Maui. 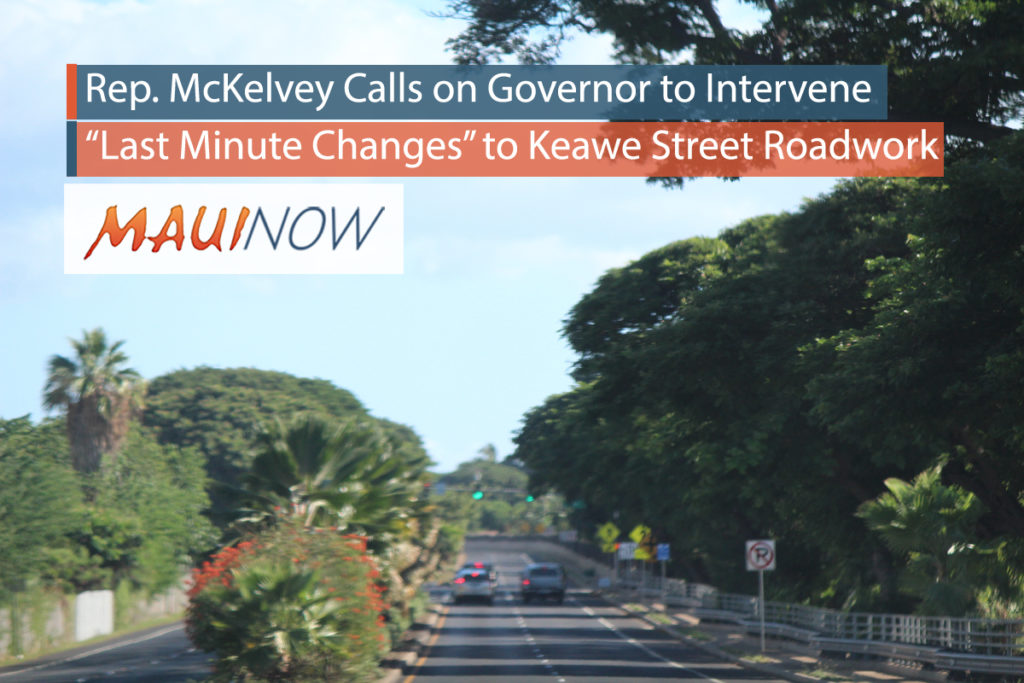 “I am officially requesting your office immediately intervene,” Rep. McKelvey said in the letter to Gov. Ige. “This proposal, which involves essentially removing one of the existing northbound lanes from the highway, will have a detrimentally profound and negative impact that will result in more traffic congestion for the West Side of Maui.

“Not only will these modifications have immediate disastrous results for traffic, it was not part of any planning documents. The public therefore, was given no chance to comment and receive the responses they deserve for their concerns.”

McKelvey (West Maui, Māʻalaea, North Kīhei) said a temporary delay would allow the HDOT time to work with the community and formulate a better solution than the one being proposed. The department’s insistence on pushing forward with these proposed changes makes it imperative that the governor step in and halt any construction, he said.

According to McKelvey, HDOT’s proposal cordons off the existing northbound right lane of Honoapiʻilani Highway for through traffic with hard barriers. This forces drivers to move to the left before the barriers or be forced in the opposite direction of where they are going and required to loop around the entire town of Lahaina to re-merge. Besides forcing all the two-lane traffic to one lane, causing gridlock on the heart of the town itself, the isolation of the lane for right turn traffic only does not address the underlying capacity issues that started this discussion.

As an added concern, McKelvey said, “the only discussion the HDOT held about this proposal was a so called community meeting with a handful of residents and businesses that was announced at the last minute.” Rep. McKelvey said his office received no notification about this meeting.

“The ramifications of this decision are being completely ignored,” McKelvey said. “This is very troubling because of the disaster that could occur if it continues to go forward.”

The Maui representative is also greatly concerned that both the environmental impact statement process as well as the federal design process, which requires public input response in community facilitation, has been completely ignored.

“Your kōkua and leadership are needed to prevent the elimination of benefits this project is intended to have for the overstressed infrastructure of our neighbor island district. As you know, West Maui attracts thousands of daily visitors and generates millions of dollars in revenue for the State of Hawaii through taxes, fees, and economic activity,” McKelvey said in his letter.

“This situation can be remedied through the effective leadership of you and your office. You have the power to intervene to let the community be heard, and alternatives to be created that will provide the additional capacity and access to the area while allowing for more ingress and egress to the bypass for increased traffic.” 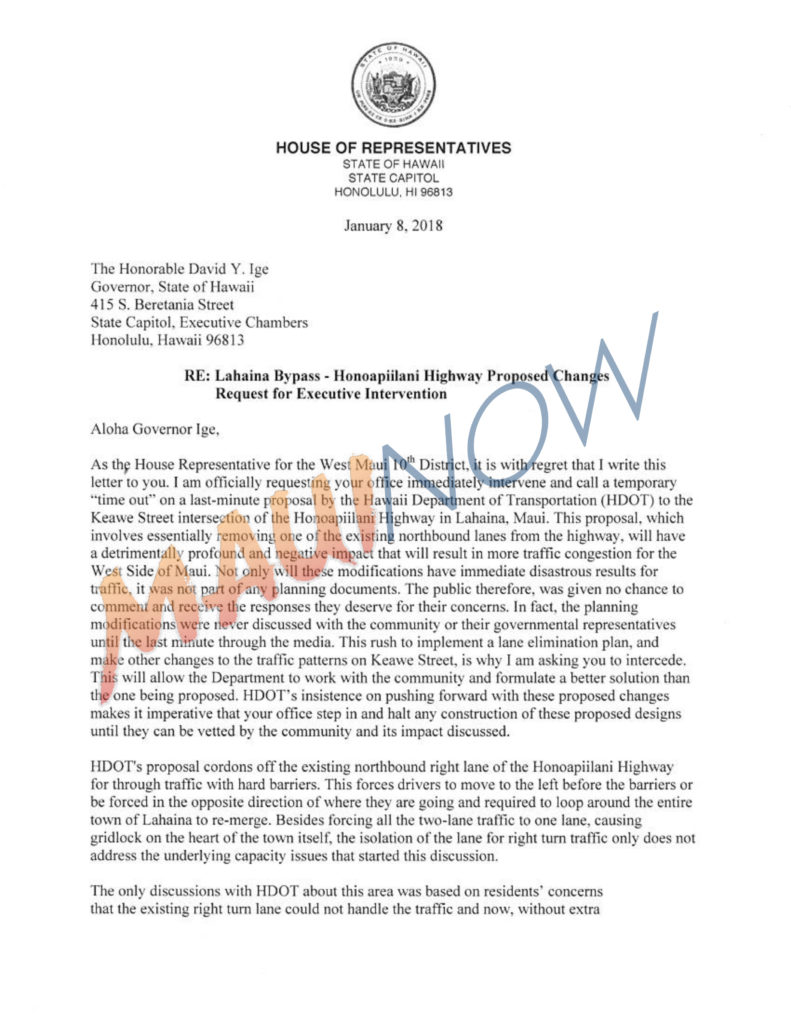 McKelvey calls on Governor to intervene on Lahaina roadwork. Page 1 of letter. Click on image to view in detail. 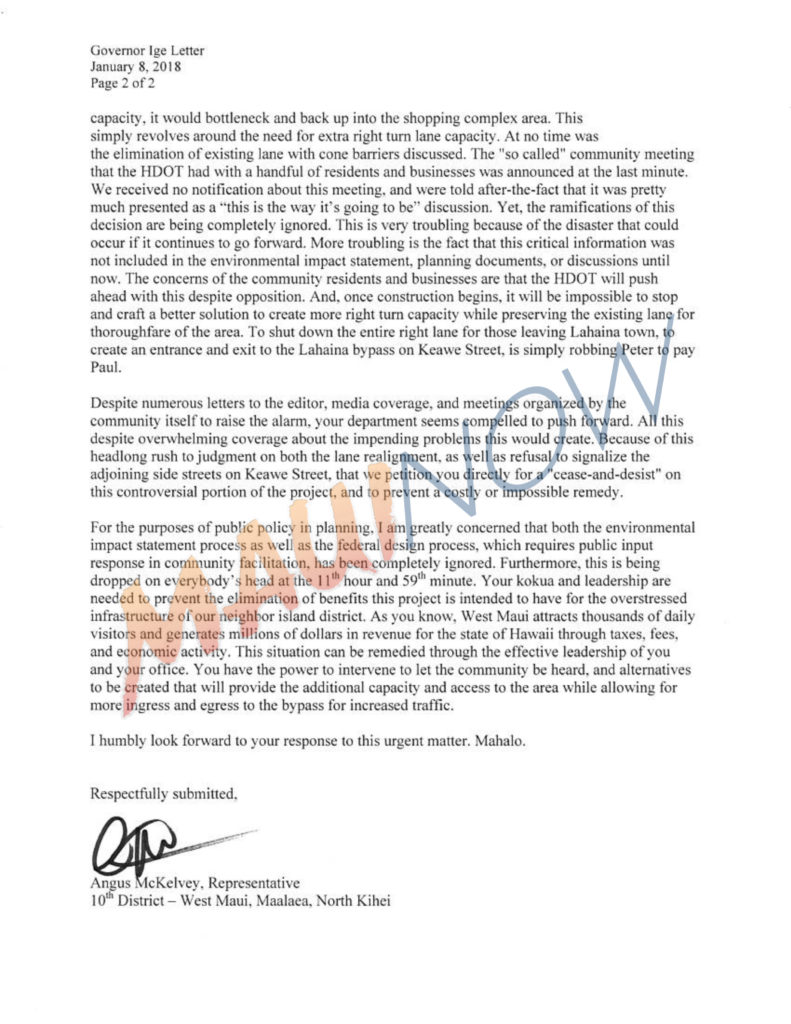 McKelvey calls on Governor to intervene on Lahaina roadwork. Page 2 of letter. Click on image to view in detail. 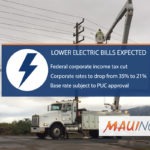 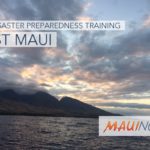