On the Menu & In the Kitchen at Cow Pig Bun

Chef Roger Stettler doesn’t like to brag. But the fact of the matter is, this humble chef has a wealth of impressive experience that spans decades!  He completed culinary certifications in his homeland of Switzerland, receiving the acclaimed title of Master Chef by the Swiss government. He was recognized as Maui’s Chef of the Year during his tenure at Four Seasons Resort Maui, and the creative, quality burgers at Cow Pig Bun are consistently ranked as among the best on the island. This is a chef who puts a lot of thought into what he’s constructing in the kitchen.  See him in action throughout our video above.

“For me, it’s important that when you have fatty food, you have something that cuts through that, so you need acidity in these dishes,” Stettler describes.  “So you’re balancing: acidity, a little spiciness, a little bit of fat going throughout the burger with every bite you take; it has to have a little crispiness and you’ve got to feel good about it too, so hence the lettuce.  You’re going to have a little bit of everything on there.”

Cow Pig Bun has been tucked away in the tech park off Lipoa Street in Kīhei for almost five years now.  That will be changing come Fall, as they move to a brand new spot, with plans to put even more of Chef Stettler’s creativity into the menu.

“With the new location, which will hopefully be announced soon, we’re trying to evolve in that concept, and go a little deeper into the creations,” he says.  “There’s really no boundaries in this type of food; you can mix and match pretty much everything.”

“That’s kind of my heritage,” says Stettler. “My mother is Italian, my dad is Swiss, so I grew up with all that type of Italian food.

Cow Pig Bun is known as a gathering place for visitors, locals, groups and hospitality industry workers, serving both food and drinks between noon and midnight Monday through Saturday, with happy hour from 3 to 6 p.m. as well as late night.  Get more details on the drinks in our previous On The Menu story here.

“We want to be in a price point that is affordable. You don’t have to think twice with, ‘Can I go there, can I afford it,'” Stettler explains. “I thought in creating a place like this was to build a lot of camaraderie: people can meet here; if they had a bad day, maybe we’ll help them to make it better!”

On the Menu stories are part of Maui Now’s featured video platform.  Get details on client services and more here. 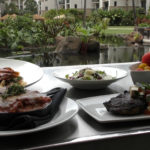 On The Menu with Pūlehu, An Italian Grill 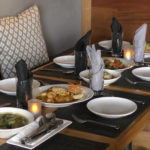 On The Menu: Groups Welcome at Maui Thai Bistro