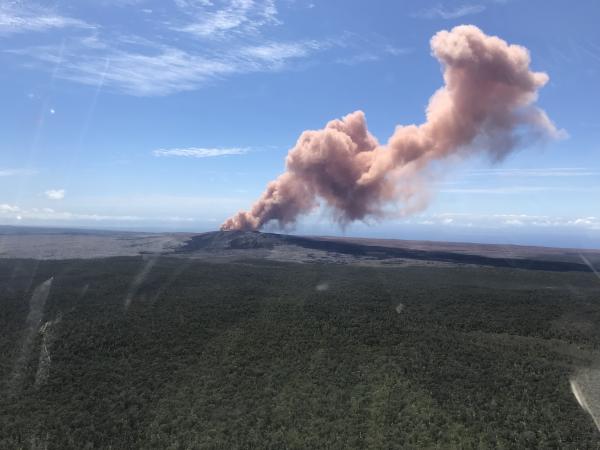 At 10:30 HST, ground shaking from a preliminary magnitude-5.0 earthquake south of Pu‘u ‘Ō‘ō caused rockfalls and possibly additional collapse into the Pu‘u ‘Ō‘ō crater on Kīlauea Volcano’s East Rift Zone. A short-lived plume of ash produced by this event lofted skyward and dissipated as it drifted southwest from Pu‘u ‘Ō‘ō. USGS photo by Kevan Kamibayashi.

The Hawaiʻi Tourism Authority is assuring travelers that the impact from the recent volcanic eruption on Hawaiʻi Island is “limited to a remote region on the east side, far away from the rest of the Hawaiian Islands.”

The statement was released in response to increased volcanic activity and a new flow of lava that began yesterday from the Kīlauea Volcano.

Hawaii Governor David Ige said, “We are allocating all necessary state resources to keep our residents safe in this rural area on the island of Hawaiʻi where the volcanic activity is occurring. We have heard from people around the world concerned about Hawaiʻi’s welfare and want to reassure everyone that this is limited to a remote region on the slopes of Kīlauea Volcano. Everywhere else in the Hawaiian Islands is not affected.”

George D. Szigeti, president and CEO of the Hawaiʻi Tourism Authority, commented that the safety of residents and visitors is always the tourism industry’s top priority, while adding that travelers with a trip already booked to the Hawaiian Islands or in the planning stages can be put at ease knowing their vacation experience will be unaffected.

“No flights into airports anywhere in Hawaiʻi are being impacted by Kīlauea Volcano and the area where the lava is coming to the surface is very far from resort areas throughout the Hawaiian Islands where visitor accommodations are located.

“Travelers can enjoy their vacation experience in the Hawaiian Islands to the fullest, with the only word of caution being that they stay out of areas closed to the public for their own safety.”

The HTA notes that the closest resort areas, in Kona and the Kohala Coast on the island of Hawaiʻi’s west side, are more than 100 miles away from where the lava flow is occurring and “shielded by the massive mountains of Maunakea and Maunaloa.” Resort areas located on Oʻahu and Kauaʻi, and in Maui County are located hundreds of miles from Kīlauea Volcano.

Kilauea has been an active volcano since 1983 and is one of Hawaiʻi’s most popular attractions, with residents and visitors drawn to the wonder of seeing nature at work in the creation of new land via helicopter and ground tours or visits to Hawaiʻi Volcanoes National Park.

Due to the volcanic activity there is a no-fly zone over Kilauea volcano. In addition, Hawaii Volcanoes National Park was closed this afternoon until further notice because of damage caused by earthquakes and aftershocks in the area.

Travelers planning a trip to the Hawaiian Islands who have questions can contact the Hawaiʻi Tourism United States Call Center at 1-800-GOHAWAII (1-800-464-2924). 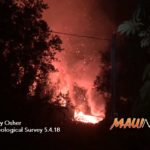 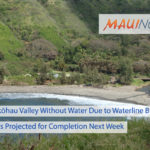 Honokōhau Valley Without Water Due to Waterline Break