Anuhea to Perform at Concerts at The Shops

Hawaiian singer/songwriter Anuhea will take the stage for her first-time Concerts at The Shops performance on Wednesday, Aug. 29, 2018 at 5:30 p.m. at the Fountain Courtyard. Rylee Anuheakeʻalaokalokelani Jenkins, popularly known as Anuhea, blends engaging lyrics, acoustic soul, pop, rap and reggae into a unique style that has earned her the title of Hawai‘i’s #1 female artist.

Born and raised on Maui to a family rooted in music, Anuhea is of German, Hawaiian, Welsh, Chinese and Native American (Cherokee) descent. She showcased her musical talents early while attending Kamehameha Schools in Honolulu and then followed her passion by pursuing a career as a musician. By May 30, 2010, Anuhea won her first two Na Hoku Hanohano awards for Most Promising Artist and Contemporary Album of the Year.

Anuhea has performed for nationally renowned festivals and sports events, toured in Japan and Guam, and joined the stage with music greats such as Jack Johnson, Ziggy Marley, and Taj Mahal at the 2010 Kokua Festival in Honolulu. She has released several albums to date including her debut album “Anuhea,” which ranked #7 on the iTunes Pop Charts, #4 on R&B, and #3 on the World/Reggae Billboard Charts. Her third album “Butterflies: Anuhea Live” was released through Mailboat Records, a record label started by Jimmy Buffett. She continues to write and record music, recently releasing two new singles under Mailboat Records, “Sweet Thing” (a cover of Chaka Kahn’s 1975 original), and “Island Inside Me”, an original written with a Kickstarter Backer Brian Fielkow.

Concerts at The Shops is a free monthly concert series that is open to the public and features headlining musicians from all the Hawaiian Islands. This music event occurs every third and fifth Wednesday of the month from 5:30 p.m. to 7:00 p.m. with performances at the main Fountain Courtyard of The Shops at Wailea.

In a continued effort to give back to the community, The Shops at Wailea supports a different Maui non-profit each month with 60% of the special event parking fees going back to the non-profit. The August non-profit recipient is Assistance Dogs of Hawai‘i. The Shops’ goal is to enrich the community through exploration and discovery in the arts and music while supporting local businesses and non-profit partners. The four-hour special event parking voucher is available for $5 and can be purchased at the nonprofit’s parking table.

For a complete calendar of events, activities and entertainment, visit www.TheShopsAtWailea.com. 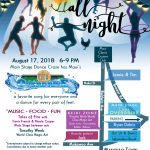 “Dance the Night Away” at Makawao 3rd Friday 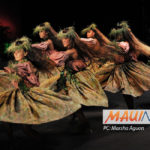