How are Lava-Flow Maps Made During an Eruption?

by scientists at the USGeological Survey, Hawaiian Volcano Observatory

During Kīlauea Volcano’s recent lower East Rift Zone (LERZ) eruption, lava-flow maps were a staple of the public outreach effort by the USGS Hawaiian Volcano Observatory (HVO). This was not the first time such maps have been in the public eye, as regular maps of Puʻu ʻŌʻō lava flows have been posted to HVO’s website for many years. Still, this summer’s dynamic situation in lower Puna presented its own unique set of cartographic (map-making) challenges, which kept HVO and other U.S. Geological Survey staff on their toes for over three months.

Computer programs known as Geographic Information Systems (GIS) have been the preferred tool of USGS cartographers for many years. Using commercial GIS software, the user creates a stack of “layers,” such as labels, roads, and political boundaries that together form a map.

When magma intruded into the LERZ in early May 2018, HVO prepared a template map of the region that could be ready for rapid distribution if/when lava erupted to the surface. The first eruptive fissure opened in the Leilani Estates subdivision in the late afternoon of May 3, and HVO released its first eruption map the next morning.

In designing this map, GIS analysts considered various logical rules for symbolizing and stacking the layers. For example, roads are shown in shades of gray because other colors could cause confusion, with blue often used for streams or paths of steepest descent, and red reserved for lava flows.

In the stacking order, a lava flow is always on top, because it effectively destroys everything that was once in its place. A road shown on top of a lava flow would suggest that it survived or was recently rebuilt.

For the first week of the 2018 LERZ eruption, lava flows proved difficult to map, as they stayed close to the fissures in Leilani Estates, where vegetation obscured aerial views of their margins. Mapping the lava on foot, which had been common for Puʻu ʻŌʻō flows, was too dangerous because the dense understory also blocked exit routes.

As a result, HVO initially used simple dots to depict the eruptive fissures on early maps. To any GIS analyst, it is far from ideal to display a two- or three-dimensional feature with a point location, but such compromises can be necessary during a crisis.

USGS colleagues with the National Civilian Applications Center reviewed various satellite imagery sources, including those of the Department of Defense, and drew two-dimensional polygons around lava flows that had been emplaced since the previous update. After “ground truthing” these new data with field checks by USGS crews, the polygons were added to the eruption map in bright red. When satellite views were unavailable, polygons were derived using a similar process from helicopter-collected thermal maps.

The process of drawing polygons from satellite or thermal imagery could take a few hours. Unfortunately, the speed at which some LERZ lava flows advanced could render those maps obsolete almost immediately.

This led GIS analysts to employ more “aggressive” methods of mapping. For example, some maps posted in late May and early June 2018 showed a simple arrow and point for the flow front, which had been pinpointed only minutes before during a helicopter overflight. If aerial photographs included landmarks, it was possible for GIS analysts to sketch the flow fronts onto pre-eruption satellite images. These methods accelerated the map-making process when the need for information became most critical.

Every volcanic eruption is different, and certainly the next major Hawaiian eruption will require new, and even more innovative, methods of lava-flow mapping. The recent LERZ eruption was a learning experience for everyone involved, especially for staff making HVO’s eruption maps. By expanding the various data collection methods available to GIS analysts, HVO and the USGS will be even better prepared when responding to future volcanic activity. 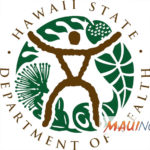 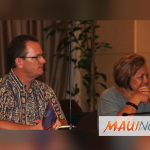