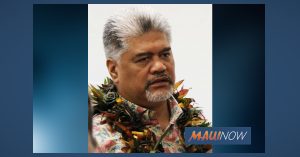 After seven years at the helm, Office of Hawaiian Affairs CEO, Kamana‘opono Crabbe today announced his plans to resign.

The announcement was made during today’s Board of Trustees meeting.

His last official day as OHA CEO will be June 30, 2019, the day his contract expires.

Maui OHA Trustee, Carmen Hulu Lindsey, responded to our request for comment saying: “With the end of CEO Kamana’opono Crabbe’s contract with OHA and his decision to move on to a new chapter in his life, I want to sincerely mahalo him for his contributions to our Lāhui and our kanaka in every corner of our Pae ʻāina.  We wish him well and know that he will continue to positively influence our Lāhui.”

Crabbe has held his executive post with OHA since January 2012.

According to the OHA website, his priorities include “restoring OHA’s integrity in the Native Hawaiian community. He is also focused on nurturing a sense of commitment to empowering Hawaiians and strengthening Hawaiʻi.”

Prior to his executive role, Crabbe was a Research Director for OHA, where he gathered data needed for decision making.

His online bio states that before joining OHA, he was the Director of Psychology Training at the Waiʻanae Coast Comprehensive Health Center. He also earned his doctorate in clinical psychology from the University of Hawaiʻi at Mānoa.

“I am incredibly proud of my accomplishments at OHA, from returning the mana of Kalaniōpu‘u’s ʻahu‘ula and mahiole to Hawai‘i; to the naming of OHA as a co-trustee of Papahānaumokuākea; to elevating OHA as a repository of Native Hawaiian knowledge, data and research through our online databases and research reports. It has been a great voyage and I enjoyed every minute of sailing with all of you.

“As Ka Pouhana, I ask the OHA staff to kūlike, e alu mai, a ‘onipa‘a ē: to stand beside one another as a source of strength and pride, to cooperatively work together as a true ‘ohana should, and to remain steadfast despite the winds of change, remain forever resilient and staunch for each other, in spite of each other.”

“I want to take this opportunity to extend a warm and heart-felt mahalo to Dr. Kamana‘opono Crabbe for his leadership and commitment to serving our people and the mission of the agency since becoming the Chief Executive Officer of OHA in 2012. During his tenure, he has had many notable achievements, including further instilling Hawaiian culture into the operations of the office, and strengthening OHA’s relationships with the community and our partner organizations, while providing steady guidance to our Administration.“