A recycling grant from the county provided funds to purchase dedicated collection bins at three County park facilities: Wells Park, Kahului Community Center and in Kula. The grant also covered the cost of shipping the balls to the mainland for one year.

From July 2018 through June 2019, a total of 7,043 used tennis balls were collected  and shipped to the mainland, where they found a new life as rubber crumbs  used in the construction of new tennis courts.

This half-a-ton of used tennis balls represents non-decomposable, methane producing rubber waste, which did not end up in the Maui landfill, according to Maui Tennis Ball Recycling, LLC. 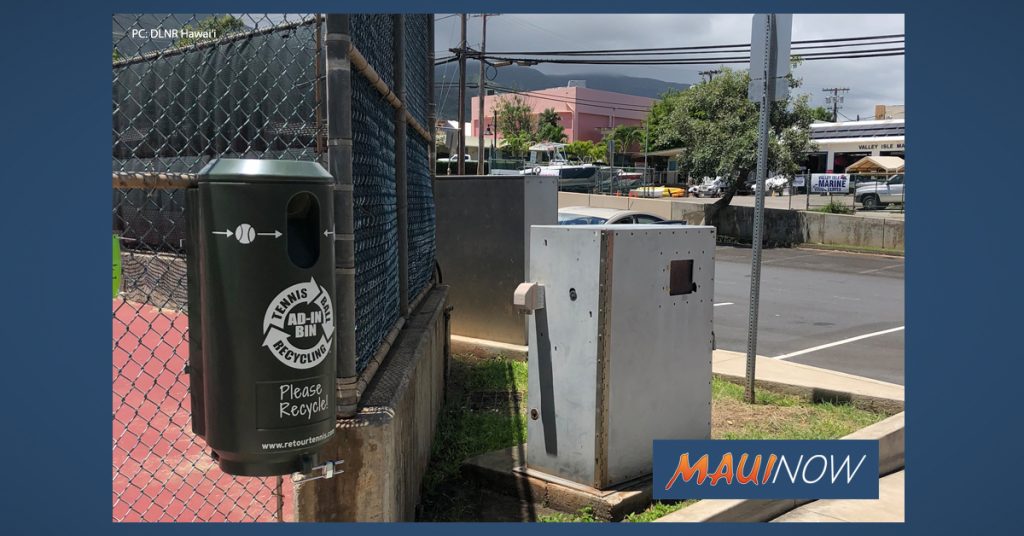 “Most people don’t know that a good tennis player will use three tennis balls per match and then discards them. A growing number of players are starting to recognize that this is  a significant environmental problem. Living on a small island with limited amount of landfill space makes this recycling effort an even more pressing matter,” said organization leaders.

Panna Speas Cappelli of Maui Hands, Inc, an avid tennis player and supporter said, “We really need to start recycling all tennis balls, worldwide.  A couple years ago, I spoke personally with USTA Chairman and President, Katrina Adams, about forming a nationwide tennis ball recycling program and she advised starting locally.  When Karuna Santoro started a Maui program the following year, I helped send the first box of balls to a mainland recycling company.  They had never received a shipment of balls from so far away.”

Giovanni Steven Cappelli of Casanova Restaurant, Inc said, “We need to develop awareness in everything we do, every box we open, every plastic we throw away. The pleasure of popping that new can of balls will be guiltless, when you know that those balls will be recycled and not just going into our landfill. Let’s make sure that our grandkids will be able to play tennis as well…..recycle those balls.”

“Even though the grant has ended, Maui Tennis Ball Recycling, LLC  is committed to carry on the recycling effort and would appreciate continued and expanded financial support from local tennis players and businesses,” organization leaders said.