The new 123-foot tugboat is the fourth custom-built “Kāpena Class” tug to be added to Young Brothers’ fleet in 20 years, representing a total investment of $80 million.

“The Kāpena tugs will allow us to continue providing the vital service of connecting the Hawaiian Islands with safe, reliable and affordable transportation.”

According to the release, the new fleet represents the latest in “green” fuel-reduction technology that will generate less pollution than the companyʻs other tug boats. 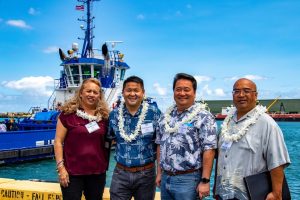 “For those who live on the neighbor islands, Young Brothers remains very important in sustaining our economy and well-being,” Sen. Gil Keith-Agaran said in the release.

“This boat culminates the $80 million investment they’ve made in new tugs that are more efficient, better for the environment and better for our economy.”

The new vessel is named after Young Brothers captain William “Bob” Purdy, who dedicated 33 years of service to the company. The word kāpena means captain in Hawaiian.

Based in Kahului, the 6,000-horsepower tug will provide service to all seven major Hawai’i ports.

The three other “Kāpena” class tugs were added to the fleet earlier this year. Young Brothers plans to hold a blessing in Honolulu for the entire fleet in October.