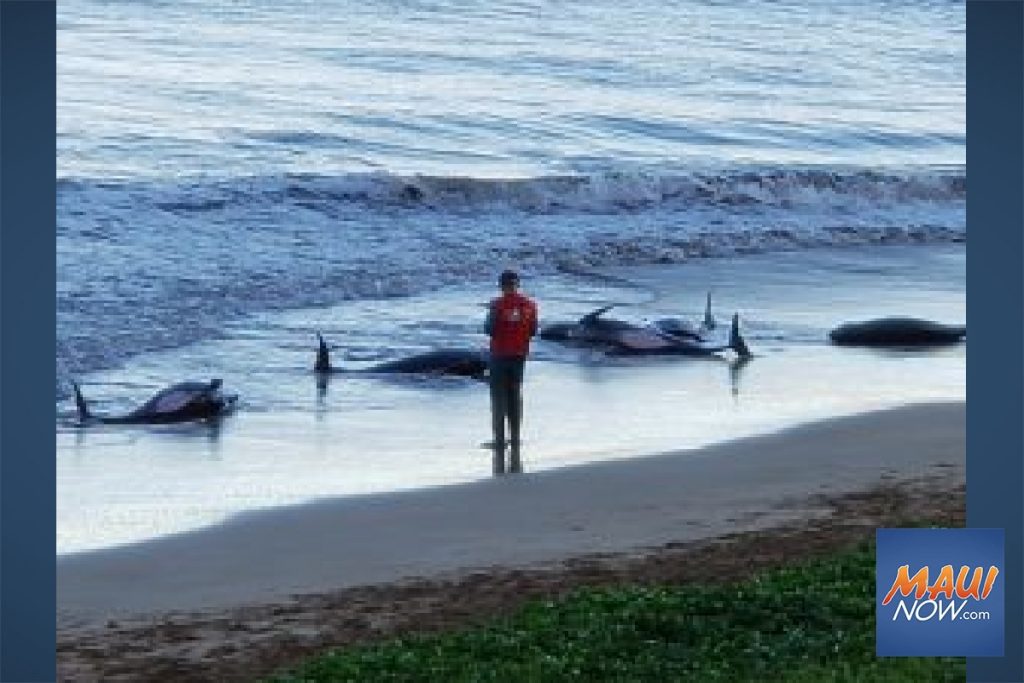 Tourists staying in the Sugar Beach area woke up to find 10 stranded whales in front of their beachfront condos this morning.

At first glance Canadian Shellie McClinton said she thought it was a human body.

“It was a shock at first,”McClinton said. “It’s still so sad to see them like this.” 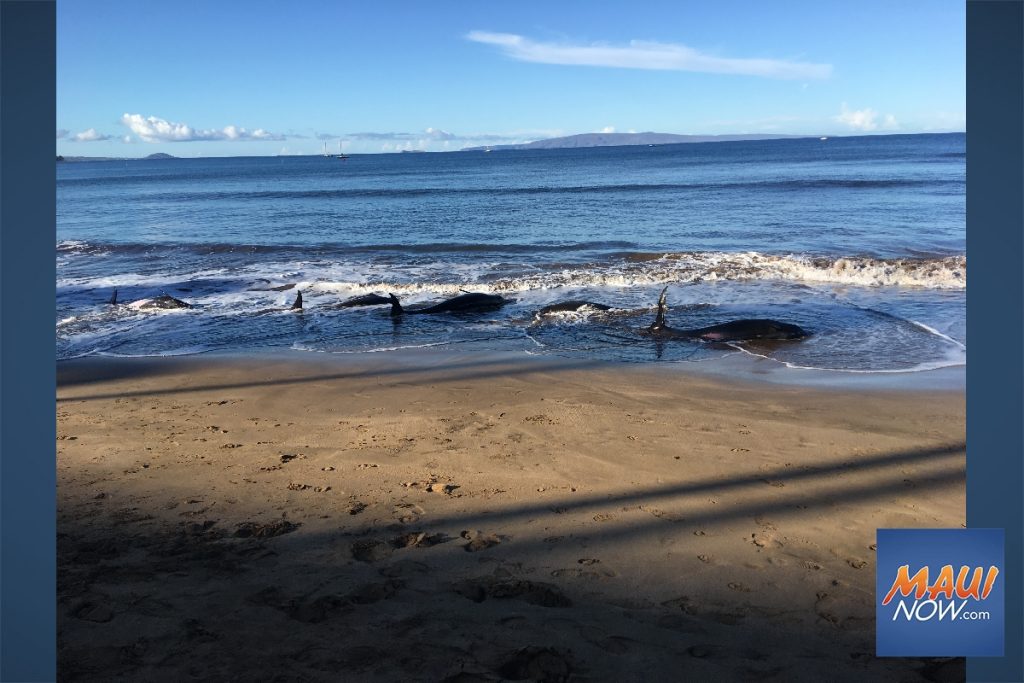 Responding to the sightings this morning, state the Department of Land and Natural Resources taped off the area to keep bystanders at a safe distance. However the whales are a federally protected species, which brings them under the jurisdiction of the National Oceanic and Atmospheric Administration (NOAA), Fisheries division. 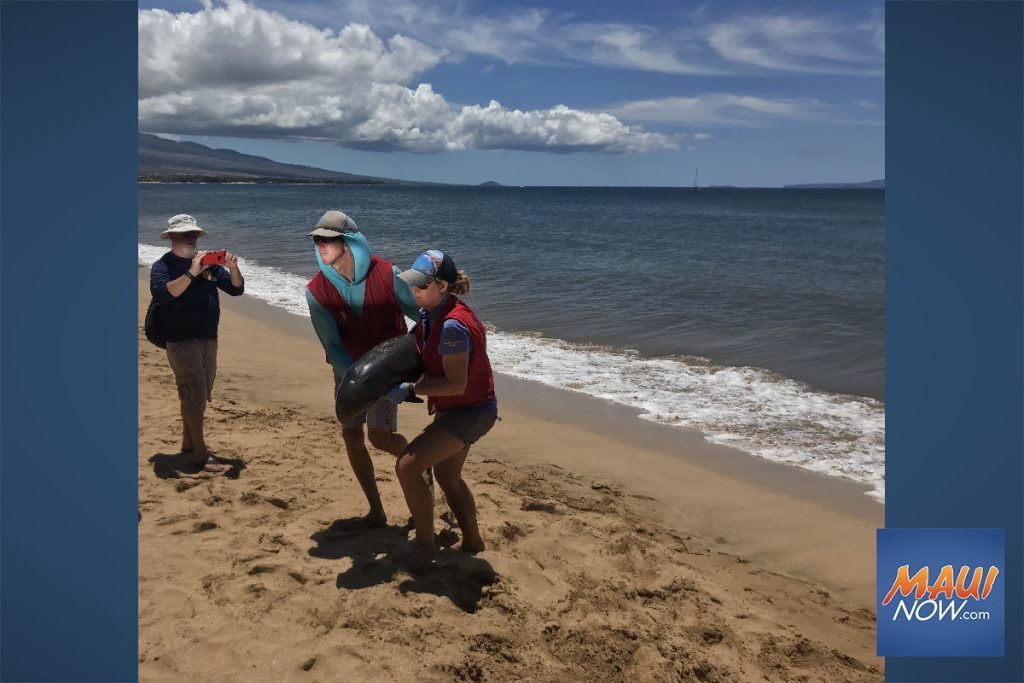 “NOAA Fisheries is responding to 10 melon-headed whales that have stranded along the coast in the Sugar Beach area of Maui.  Four of the whales have expired,” said NOAA Public Affairs Officer Jolene Lau. “NOAA veterinarians determined that the four stranded whales were in grave condition and nothing more could be done to save them, so the animals were made comfortable with a sedative and then humanely euthanized to relieve their suffering. 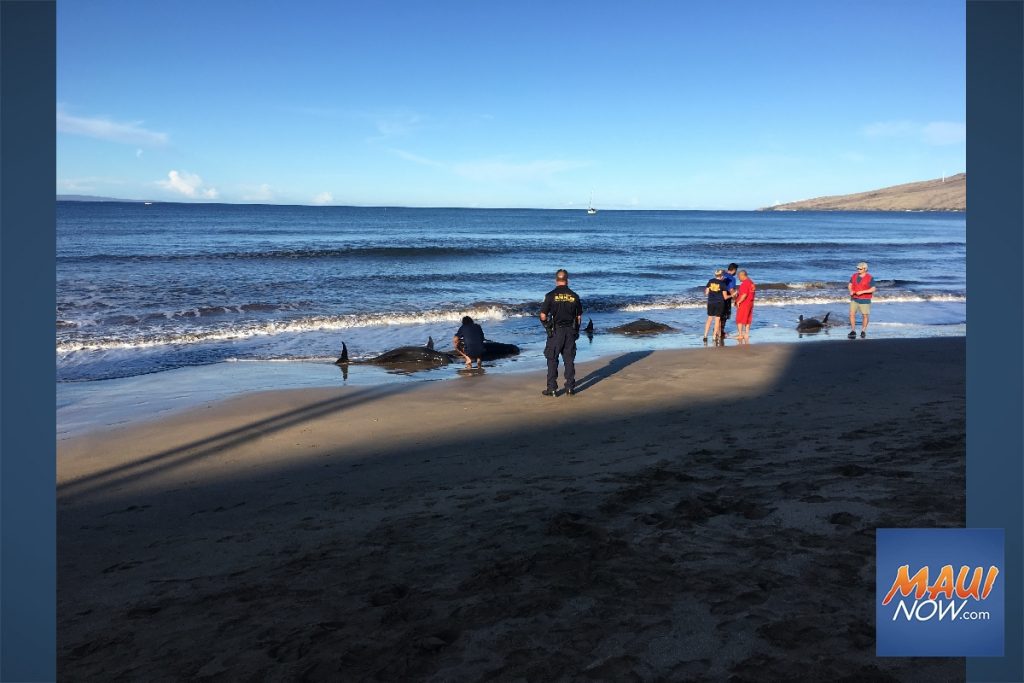 The remaining six whales showed signs that they might survive, so they were refloated back into the ocean.  A series of re-strandings occurred, but six remained in the ocean as of Thursday afternoon.

About seven hours after the initial stranding was reported, a deceased calf washed ashore about a mile from where the mass stranding had occurred.  Authorities believe the animal was part of the same social group of whales.

David Schofield, Regional Marine Mammal Health and Response Program Coordinator said, “the fact that there was a deceased calf may lend some insight into maybe there was an individual that was having trouble with pregnancy or birth and they followed calf inshore.  And so, the story is yet to be written on what happened here, but we’re getting clues as we go along the way.”

Authorities say it will  probably take several weeks to several months to piece all these clues together to determine what caused the stranding. In recent memory, Schofield says there was a mass stranding of 17 pilot whales, five of which died in Oct. 2017 on Kauaʻi.  In 2016, we reported a stranding of a melon-headed whale at the same beach on Maui.  That animal was euthanized.

“Here in Hawaiʻi, we usually have single-strandings, so this is a unique situation,” said Schofield.

NOAA Fisheries is working with the University of Hawaiʻi Stranding Lab to conduct post-mortem exams on the dead whales to try to determine what caused the stranding and gain as much information as possible about these whales.  According to NOAA, the post-mortem exams will also assist in better understanding their natural history and inform whale conservation efforts. 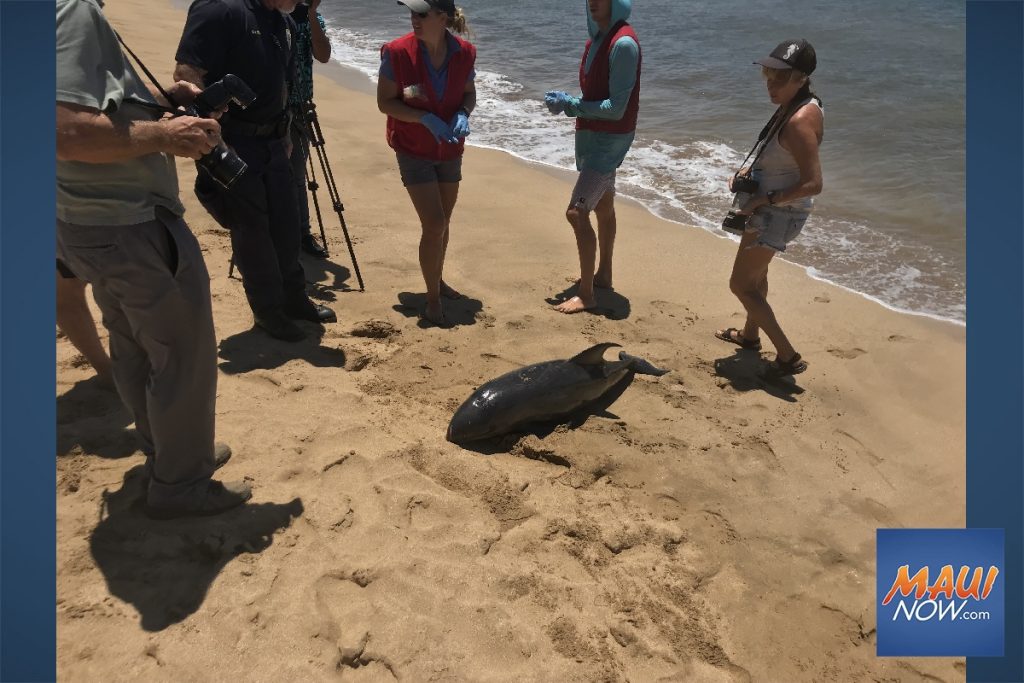 “We have been working closely with Hawaiian cultural practitioners during this stranding response.  Practitioners conducted protocol, including pule (prayer), before and after the whales were euthanized,” said NOAA officials.

Cultural practitioners were informed of this morning’s events and conducted prayer and protocol, but expressed sadness over the decision to euthanized some of the animals.

Kealoha Pisciotta, member of Kiaʻi Kanaloa said, “And that means that they can never return to the ocean. So we’re just asking for dignified death and or the ability to recover from their shock and go back out to sea with their ʻohana, which is still out there.”

Vernon Kalanikau, Cultural Practitioner from Maui said, “If it survives, then we’re all happy, if not at least hala (to pass away, die), or they get the opportunity to cross into pō (night, darkness, obscurity; the realm of the gods) on their own and not be determined by injections.”

Authorities say they will continue to work with the community and cultural practitioners while still working to fulfill their mandate for stranding response and post-mortem exams.

NOAA thanked the many  volunteers and groups that assisted with the response including the Hawaiʻi Department of Land and Natural Resources, Division of Conservation and Resources Enforcement (DOCARE), the County of Maui Police Department and other partners. 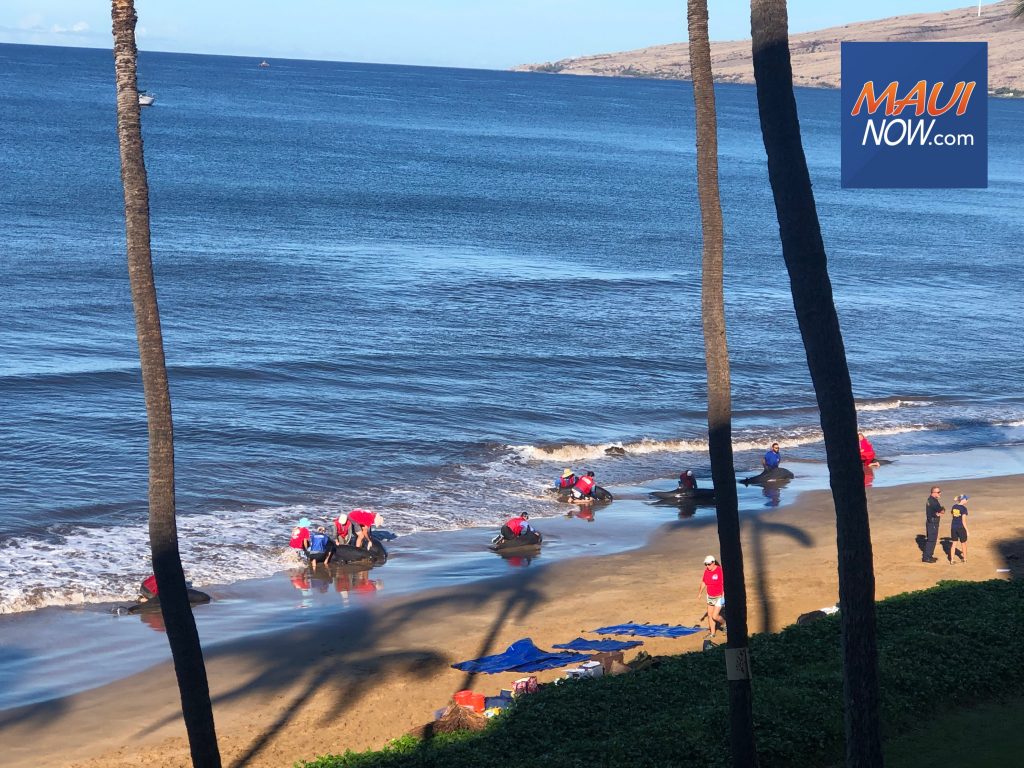