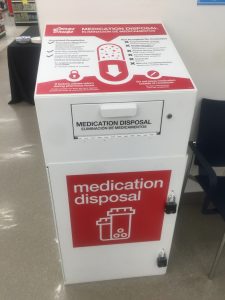 Longs Drugs stores in Kahului, Kihei and Lahaina this week have have placed medication disposal drop boxes available for the public to access.

According to CVS – the company that owns Longs in Hawaii – their medication disposal boxes nationwide have collected 436,000 pounds of unwanted medications since 2014.

State Senator Roz Baker helped to get the drop boxes placed in Longs because she said they will not only get rid of dangerous, unwanted drugs but also protect the environment.

The Centers for Disease Control estimated that 75,000 children (18 years old or younger) are seen in emergency departments each year because of unintentional medication poisonings (excluding recreational drug use). Most of these visits (over 80%) were because an unsupervised child found and consumed the medication without adult supervision.

There is also the danger that addictive opioids such as Vicodin, OxyContin and Percocet can be stolen by family members.

CVS officials said all drugs collected at their drug stores are shipped to the mainland and destroyed by a U.S. Drug Enforcement Agency approved company. Medication drop-off is also available at all six Maui Police Department stations.

For more information check out the U.S. Food & Drug Administration’s webpage on “Safe Disposal of Medicines.”